Recommendations from the C-suite

We saw a few differences in the recommendations from CIOs, CTOs, COOs, CEOs, and founders. Specifically, this demographic showed a small spike in preferences for New Relic and Azure. 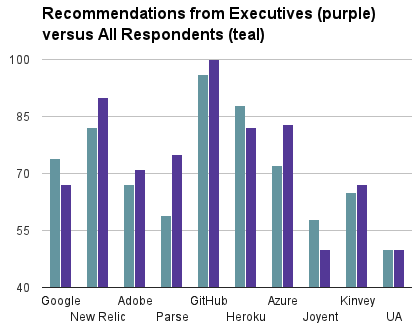 With Linux’s provenance as an open-source operating system, Windows’ foothold in the Microsoft community, and Apple’s history in the world of creativity and design, we decided to put these stereotypes to the test. For the most part, they played out just as you might expect.

Our Linux-loving respondents had little use for Adobe (which doesn’t make Linux-compatible versions of its software) and the virtual machines of Joyent. Mac users showed their designer stripes in a marked preference for Adobe’s Creative Cloud suite of tools. And the Windows users can always be counted upon to stick up for Azure. 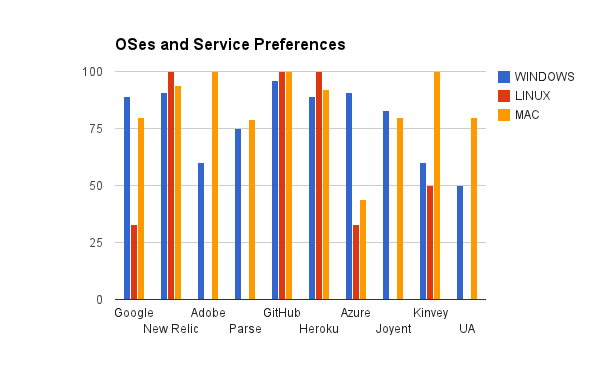 U.S. residents accounted for less than half of the total respondent pool. 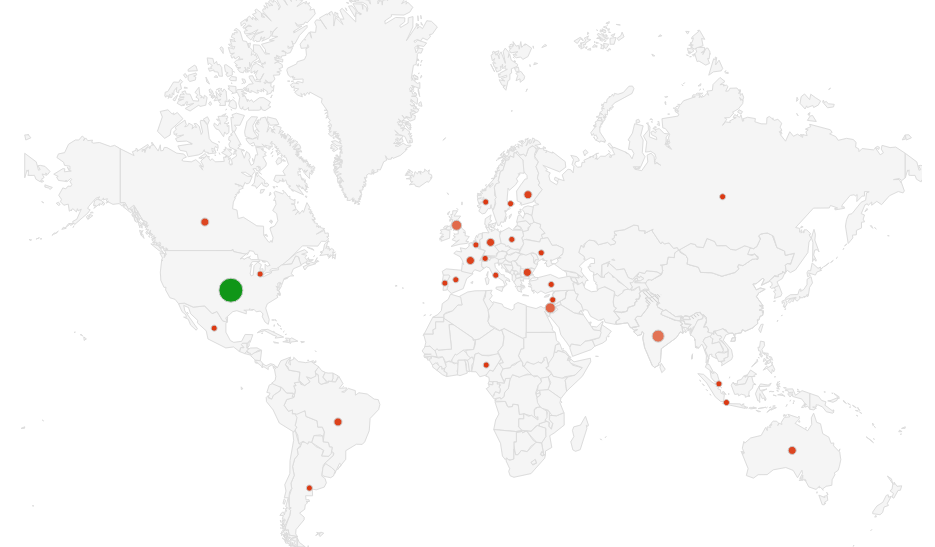 There were several tools that didn’t make our initial list but which each received several write-ins. These services each meet some but not all of our qualitative criteria. However, strong developer sentiment in favor of these offerings will likely put some of them on our next survey.

Amazon has several developer offerings collectively known as Amazon Web Services. Together, AWS provide hosting, networking, database resources, deployment, management, and application services to an army of developers. AWS powers some of the most popular consumer applications on the web.

Bitbucket is a code repository host and a GitHub competitor. While it’s tough going up against one of the most popular developer services around, Bitbucket fans were ardent in their support for the service. While GitHub favors Git as a technology, Bitbucket supports both Git and Mercurial.

Cloud9 IDE is what it sounds like — a web-based integrated development environment. Many developers we consulted for this survey indicated a lack of confidence in the performance and robustness of cloud-based IDEs. However, Cloud9 is near the head of a small but dogged pack of startups in this space.

SendGrid is a service that helps developers send e-mail, whether it’s transactional updates, marketing missives, or enterprise communications. The best devs we know swear by this service, which counts among its clients many of Silicon Valley’s most notable startups.

Cloud-based developer tooling is still a very new and highly volatile marketplace. As development itself continues to evolve at an astonishing rate, we will continue to follow both the heavyweights in this industry as well as the up-and-comers to see who’s on the rise, who’s on the downswing, and who is capturing the future of development.

We hope you’ll continue to participate in our updated survey as we track the best, most innovative cloud-based developer tools.