While the spotlight will soon shine away from the PlayStation 3, the console still has a few eagerly anticipated performances to make before it takes a final bow. Puppeteer, the PS3 exclusive coming out Sept. 10, is a highlight of that farewell tour. The game takes the intimate wonder of a real-life marionette show and injects that spirit into a side-scrolling platformer for all audiences.

But enough with the prologue. Let’s discuss why this title is more than a jump-on-enemies-to-save-the-princess retread.

Act 1: A Play for Players
Puppeteer is an ode to live performance. Stages take place onstage, with chunky set pieces constantly rolling and falling into scene. Wood-meets-papier-mâché characters act out their roles as invisible masters manipulate their inconspicuous strings. A narrator describes the proceedings in punny prose while you guide boy-hero Kutaro on his quest to free the Moon from the evil clutches of the stitched-and-stuffed Moon Bear King.

For the most part, it’s all quite charming. And the unique presentation gives the experience a whimsical patina that’ll captivate players of any age.

The symphonic score matches the game’s theatrical backdrop, making you believe that a live chamber ensemble is playing along with the action as it happens.

Act 3: Cutting Through the Chaos
Kutaro’s main weapon is a magical pair of scissors called Calibrus. With the shears, you can vanquish enemies and fly through fabric, snipping your way to success. The cutting mechanic is slightly awkward at first, but the game supplies plenty of enemies and sliceable scenery to help you trim down the learning curve. Before long, I was chopping up clouds, plants, stars, and feathers like a puppet pro. And you’ll need to hone those skills to get through the game’s final sequences.

Ultimately, I enjoyed the flowing nature of the scissors mechanic. Keeping up with a rocket by clipping its smoke trails has a delightful, almost therapeutic quality to it.

Act 4: It’s Not All In Your Head
Even the best plays have lulls and frustrating bits. The same goes for Puppeteer. Most of the core mechanics contribute to a winning platforming formula. I liked Calibrus. And Kutaro’s base moves — consisting of a hook shot, ninja bomb, reflective shield, and dive attack — add variety to the combat. But the hero’s interchangeable heads are superficial and frequently frustrating.

Here’s some context. Right at the beginning of the title’s tale, the wooden protagonist loses his head, thanks to the aforementioned big bad Bear King. Because of this, Kutaro can switch out his noggin with new ones as he finds them during his travels. Each level contains a unique selection ready for you to uncover. They’re either hidden or you earn them as prizes for defeating bosses and accomplishing other tasks.

Above: Search carefully through levels to uncover secret items.

The thing is, the heads only serve to unlock bonus levels and other collectibles. They don’t actually give you any powers. Also, specific heads pertain to these unlockable areas, so if you don’t have the right brain box, you’re out of luck. Some of these zones require heads that you only get later in the game, too, which is a cheap way to garner replay value.

Act 5: The Heroes’ Journey
Like I said, you need to search the stages for some of these puppet toppers. To do that, you have to control your companion character with the right stick. These floating helpers follow your character and can uncover certain items in the environment — while dishing out plenty of one-liners. I typically focused on my hero’s actions and only occasionally swept the surroundings for anything peculiar, and I assume many other people will do the same. A second player can control the companion, but I think that individual would lose interest after a few scenes.

Act 6: Bosses that Bored Me
Lastly, boss fights are a little too old school. Most of them consist of repeating the same tasks three times — with each instance a little harder than the last — to vanquish the enemies. I wish these encounters were as inventive as the overall Puppeteer experience itself.

Above: Boss battles could provide a little more variety.

Oftentimes while playing Puppeteer, I felt like a critic watching a Broadway production. It’s a story first and a game second, resulting in unexpected twists. As a digital journey, it’s not perfect. But that’s OK. Most of what this adventure does is refreshing and just plain charming — especially for its take-my-money-please $39.99 price. The title made me smile with its top-notch production value, radiant world, and phenomenal music.

And that’s what video games should do — give us that happy feeling.

This cheerful release stands out for its innocence and imagination. 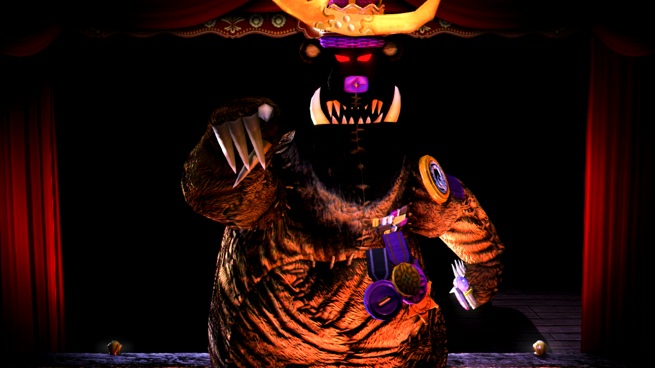 Above: The tyrannical Moon Bear King.

Puppeteer releases on Sept. 10, 2013 for the PlayStation 3. The publisher provided GamesBeat with a copy of the game for the purpose of this review.