GamesBeat: And his mother dies in the occupation, I believe you mentioned?

Bernard: Yes, she does. 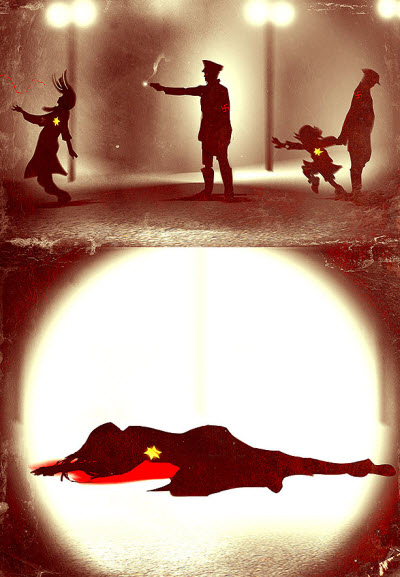 GamesBeat: It suggests that this isn’t a children’s story. Is it something you’re aiming at a more mature audience?

Bernard: Actually, I’d disagree. As far as what’s a children’s story or what’s not, I would say that people think kids can only tolerate happy things. But if you look at old fairy tales — the really old, original ones – they were extremely dark. I’d just say that if parents think their child can play this, they should go ahead and let them. If they don’t think so, that’s up to them.

When I was a kid, I learned a lot about things that happened from my grandmother, and I think that changed me. Yes, his mother dies. If a child plays this, he’s probably going to be quite sad at that moment. But he might think quite differently because of that, and want to learn more. It’s not as if it’s dark for the sake of being dark. It’s just realistic.

The escape was inspired by a guy who I met once, who was likewise passed off as a Christian orphan and hidden away. In a way it’s half fantasy. From there, when you’re in the village, he spends most of his time simply walking around and imagining his own worlds. He sees, in his mind, this fox, and he comes to think that if he helps this fox, he’ll get to see his mother. From that point, he goes on all these adventures with this fox and so on.

GamesBeat: Is the player going to go through some of this game feeling somewhat happy, or is it a relentlessly downbeat game?

Bernard: What I would say is, at the beginning, you’re going to be okay. You’ll be playing his normal life. When Paris is occupied by the Nazis, it’ll be depressing. Then when you move into this fantasy element, you’ll start forgetting about all this depressing stuff – it’ll feel quite magical. But right at the ending is when it’s going to be the worst. It’s meant to be experienced, the whole game, from start to finish. It’s not going to be all that long. It’ll be long enough that people only have to find a few hours to play it.

GamesBeat: The interesting comparison would be that there have been successful movies made about the Holocaust, yet a lot of people don’t have the imagination to envision a game about it.

Bernard: If there’s one film I would compare this the closest to, it would be “Life is Beautiful.” The way that film is a comedy at the beginning of it—You get used to the characters. You get really attached to them. When the bad parts come, it’s a lot more touching than when anything else happens.

I would say games, or interactive entertainment—Using the word “game,” people automatically think of levels and high scores and all those things. But our medium, what we lack is that we can’t do what books and films do. With big-budget games it seems like it has to be, “I’ve got a gun and I’m slaughtering thousands of people, but I’m still the good guy.” We still have a long way to go. We need to be able to tackle important subjects.

We’ve seen great games with fantastic stories, like BioShock Infinite or The Last of Us. Fantastic storytelling. But I believe our next step is being able to talk about serious subjects. I know that what I’m doing might be insane. Nobody wants to tackle this. But somebody has to start somewhere.

Like I said, through my career, I’ve been doing fantasy games about fantasy worlds. But what I’ve wanted to do is more serious things, like Imagination. I want to use this medium to educate people about things that happened in history – not just World War II, but other things that many people don’t know about. People can be influenced by books that they’ve read. Their whole life could be changed by one book. When I read The Little Mermaid, the original one, it changed me at that age. I have to think video games can do that too.

If a kid plays a game like Imagination, he starts to realize, “Well, that kid’s a lot like me. All these people are a lot like me. They’re not much different. Why did people do this to each other?” He might grow up differently, start thinking differently. If we can make people think differently, in a better way—We can educate children where there’s no education going on. After all, back in France, a bunch of my friends learned English by playing video games. This could allow people to start learning about more and different subjects. That’s what I’m hoping. 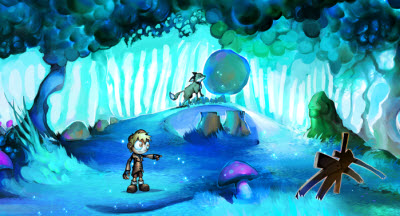 Above: Imagination’s Samuel and fox

GamesBeat: How did you wind up on Indiegogo?

Bernard: I’ll be honest with you. I probably should have gone on Kickstarter. Everyone goes on Kickstarter, it seems like. Maybe it was a risk choosing Indiegogo because everyone seems so much more comfortable with Kickstarter. I was hoping to have a bit more visibility, though, because all the big games seem to go there. So far, the response hasn’t been as good. We’ve started out slow, from when we first presented the concept.

Next week I’m going to start rolling out more screenshots about what happens in reality. People have seen the fantasy part, but now they’re going to see the reality part, and some quick gameplay videos and stuff like that. I’m hoping the campaign will start off small and grow bigger.

GamesBeat: Have you gotten any particularly controversial feedback so far?

Bernard: To be honest with you, not really. Lots of people seem to think there will be controversy around this title, but there really isn’t. If you look through the comments, people are generally for this. Nobody has really gone nuts about it. People just think it’s very risky.

GamesBeat: It seems like your approach would make a very big difference there. If there were any perception that you were commercializing the Holocaust, people would be coming out of the woodwork with criticism.

Bernard: Yeah. People who’ve read all the articles and know all there is to know about this don’t have an issue. Everything about this game, it’s done tastefully. It’s very thought-out. So I wouldn’t call it controversial. It’s just different. What I would say is, what’s controversial about reality? Again, something like Wolfenstein should be controversial. They’re basically making fun of the Holocaust in my mind.