GamesBeat: To be fair to them, they’re not even mentioning the subject.

Bernard: Which is even worse. I really feel strongly about this. They’re pretending the Holocaust didn’t even happen. That is what World War II was, and they’re completely ignoring it. Bethesda should be ashamed of doing a Wolfenstein game. I think it’s shameful that a publisher would even go ahead with that. Show that to any person who lived through World War II. It’s a disgrace.

GamesBeat: When you were crafting the story of the game, you had to be thinking about some of these things. Is there a way to do this that is more socially acceptable for people, that are even fun or engaging in some ways? Because there are obvious ways to really screw this up.

Bernard: I’d never use the word “fun” for this game. I don’t even like the word “game,” as I said. The reason why there has to be the imagination element—Again, you get to experience this as a child. The fact is that a lot of young children use this as a coping mechanism, escaping into their own mind. Like I said, I consulted with people who experienced World War II and the Holocaust. I made sure, when I was crafting this story, that it all made sense. There’s a reason why there’s this whole element of imagination plays a part in the story.

GamesBeat: There are always going to be issues around what to depict and how harsh to make some of the visuals here too, I think?

Bernard: When I talked to the Holocaust survivor I’d originally offended, he said I should make it as realistic as possible. So I don’t plan to censor anything. I want to depict how it was. If people are offended, the only thing I can tell them is, that’s reality. This is history. I don’t want to censor history.

Violent things happen, but when that happens – because the imaginary parts are so beautiful, such an escape for the main character – when reality intrudes, it’s a lot more shocking. But I would say that the violence that happens in this title—It’s not gore. It’s just what happened. The Germans would randomly shoot people or take them off to the camps. What they would do with children—It’s just the reality of what happened.

I wouldn’t say it goes beyond something like “The Pianist” or “Schindler’s List,” those kinds of films. If you remember, in those films, it’s not so much the violence that shocks you. It’s how they do it, like when the Nazis would just suddenly shoot someone. That’s what’s more disturbing. It’s how the Nazis were as people.

That brings up something very interesting, actually. In Imagination, the Nazis are presented all in black, as these shadowy figures. You can only just see their shapes and the swastika symbol. That’s it. You can’t see their faces. I’m taking away the humanity that they had, basically, because I don’t want to represent them as humans. What they were is essentially monsters, which is why they’re represented as those shadows. 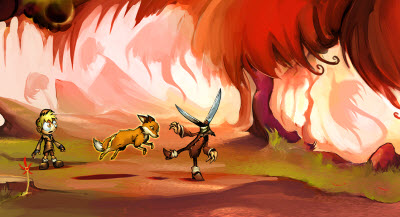 GamesBeat: Representing some of the nightmarish side of his imagination?

Bernard: It fits in. If you were a child, how could you view those people as people anymore? I think it has a lot more impact, just showing that they aren’t clearly human to him. Every single element of Imagination is more thought out that what people might think.

GamesBeat: At times, when people make something controversial, they try to deflect criticism or soften the blow a little by doing it in a not-for-profit way. Have you thought about that as well?

Bernard: If someone came to us and gave us the funding to release it on every single platform and have it out for free, we’d do it in a heartbeat, of course. But we have to find funding for this game. Games cost money to build and to port and to get out there. The reason I want to sell it, even for that small amount, is because I want to port it. I want it to come out on PlayStation Vita, PlayStation 4, and every other platform. We have to spend some time making money so we can do that.

Bernard: That’s enough to release it on PC, iOS, Android, and Mac, since we own our own engine that can make a build for those platforms. For this game, we’re going to be very precise with every do. It’s way below a proper industry budget, especially considering all the extra research we’ve had to do for this game. I want to make sure that every historical element is accurate. But that will allow us to finish up the game.

GamesBeat: The way you’ve described the game–It sounds like to some degree the game is interactive, in that the player has lots of choices as far as doing things on their own. A lot of interesting movies about the Holocaust have been about choices people have made during a very harsh time. In this game, at some point, it looks like your own vision for the story is going to override the player’s choice, and whatever they do they’re going to lose some control over what happens. How do you look at that? You have a story you want to tell, but you also have a game where people want their choices to be the ultimate determinant of what happens.

Bernard: In this game, you’re playing as a child. As a child, you don’t have as much choice over what happens to you. Even more so, when you were Jewish during World War II, you had very few choices – in almost all cases, something bad was going to happen to you. If you were playing as another kind of character in this situation, you might have more choices. But since you’re playing as this Jewish child, I want people to experience how that was, how vulnerable he is.

There will be elements where he might think, “Yes, I’m going to get out of this.” A lot of people probably felt that way. But in the end, that probably won’t happen. It’s not going to be that happy. You just can’t do that.

GamesBeat: That’s the goal, though, right? To drive the player to feel that emotion?

Bernard: Exactly. I want people to feel how it would be to be a child during World War II, a vulnerable child. I want them to experience what that would be like, or as close I can get. I can’t really get that close, of course. But closer than you can be in most games about World War II, where you’re a soldier with a gun. It’s a completely different take.

Compared to a film, since you’re in control of this, you’re going to feel it more. You’re going to grow more attached to the character. I think this is something new.