Adobe’s been building a lot of bridges between development and design lately, and its latest launch is a very solid bridge, indeed.

Adobe Generator is the newest addition to the company’s Creative Cloud; it links Photoshop to Edge Reflow, a mobile responsive design tool, in a way that streamlines creative and technical workflows and improves productivity for the entire team, especially when it comes to responsive mobile/web design.

Basically, you can turn a Photoshop file into an Edge Reflow project. That means you’re turning a regular design into a web design that is built to automatically resize and reorganize content for smaller (i.e., mobile and tablet) screens. 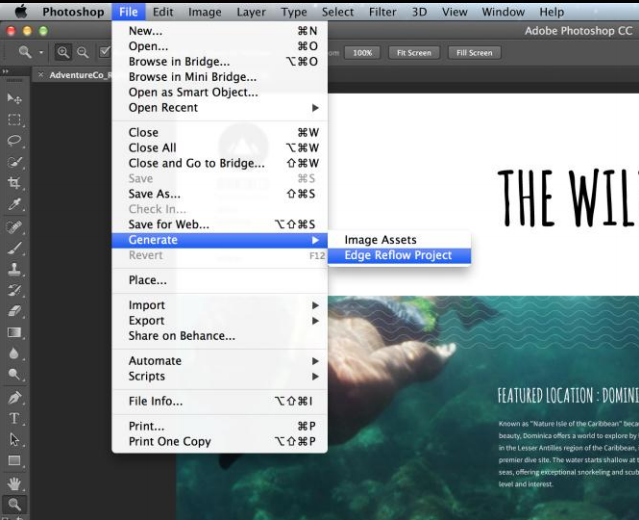 Generator brings real-time asset generation, improved automation and communication features, and APIs for building your own workflows in JavaScript.

Adobe Generator is available as of September 9 as a free update to Photoshop CC (Creative Cloud). Adobe Edge Reflow is a free preview software.

Generator is also open-source software; you can check it out on GitHub.

“The reason we chose to open-source Generator was… it would enable developers to understand what Generator is capable of,” explained Adobe’s Stephen Nielsen in a phone chat.

“That’s especially the case for the image assets plugin. If you want to tweak the behavior of the plugin, you can just jump in and change a few lines of code,” he said.

Adobe got rid of Creative Suite in favor of Creative Cloud earlier this year, and one of the bigger reasons for doing so was the all-new ability to start a continuous release cycle.

Since Creative Cloud came into being, we’ve seen all kinds of feature updates rolling out. This tool is a great example of how Adobe is becoming more nimble, especially when it’s time to react to the demands of a fast-changing industry.

“The writing is on the wall for where Adobe is headed, but people are surprised we’re going all in as soon as we are,” said Adobe’s Scott Morris in a recent interview.

“They’re lightweight, task-specific tools to get the job done,” said Morris. “That’s the direction things are heading. This model lets us meet the new world way better than the old model ever would have.”