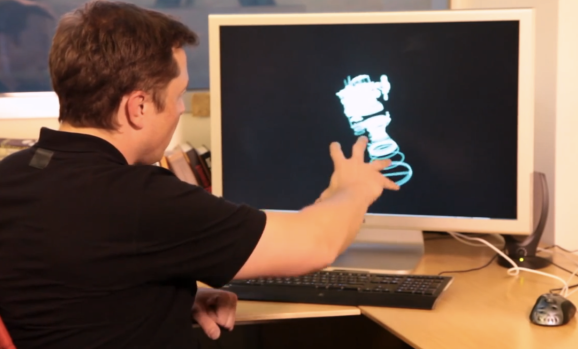 Elon Musk is a wizard. The illustrious serial entrepreneur and founder of SpaceX released a video of himself designing rocket parts using just hand gestures.

Using 3D projection, a Leap Motion controller, and Oculus Rift’s virtual reality technology, Musk manipulated a model of a rocket part by waving at his computer screen. He could grab the part, move it around the screen, rotate it in multiple dimensions, zoom in and out, and finally print it out physically on a 3D laser titanium printer.

“This will revolutionize design and manufacturing in the 21st century,” Musk said in the video. “If you can just go in there and do what you need to do, with an understanding of the fundamentals of how the thing should work, as opposed to figuring out how to make a computer make it work, you can achieve a lot more in a lot shorter period of time. I believe we are on the verge of a major breakthrough.”

Traditionally parts like these are designed using computer-aided design (CAD) software. This technology is complicated to use and still requires interacting with computers “in a 2D way that doesn’t feel natural or normal.” Musk said this approach lets designers apply their intuition by making it easier to translate an idea from the mind directly into a physical object.

Musk tweeted last month that “we figured out how to design rocket parts just with hand movements through the air (seriously). Now need a high frame holograph generator.”

In this video he doesn’t design anything new, but manipulates an existing model. It is meant to be a preview of what the future of design and manufacturing could look like. Back in its day, CAD software had a huge impact on design, and 3D printing propelled manufacturing technology forward. This, according to Musk, is the next leap.