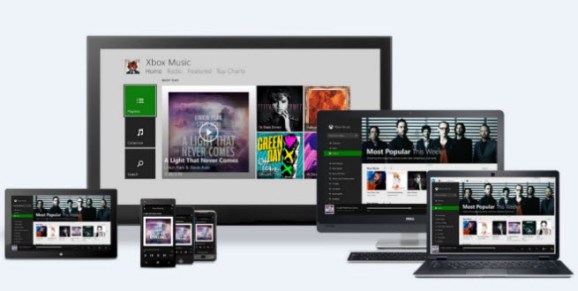 Microsoft is giving a big boost to its Xbox Music business this fall, partly by expanding its digital music service to both Apple’s iOS and Google’s Android platform. The change is the first in a series of efforts to vault Microsoft’s digital music business from a weak also-ran to a useful asset in its larger entertainment business. 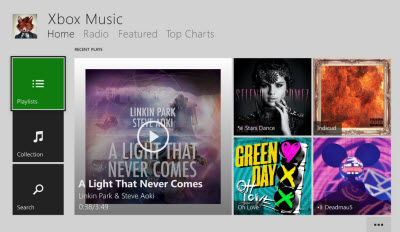 The addition of an Xbox Music app on the other platforms shows that Microsoft isn’t religious about extending its music business to its competitors’ offerings. And it also shows that the company is pressing its push into the entertainment business on all fronts, even in areas where you could easily argue that it hasn’t won.

Jerry Johnson, the general manager of Xbox Music, said in an interview with GamesBeat that the notion of making a Microsoft music service available on rival platforms fits with Microsoft CEO Steve Ballmer’s recent reorganization under the theme of One Microsoft, where the emphasis is on breaking down barriers between businesses and successfully launching new versions of Windows and Xbox in the coming weeks.

“It’s not religion. It’s a strategy about how you make [something useful] available on some of these devices,” he said. “We asked what can we do to make your music experience better.”

A few months ago, Microsoft reassessed its role in music. The Xbox Music group queried the corporation’s divisions and found 17 different teams from three different divisions had worked on Microsoft’s music products. But music was supposed to be a connector, a thread that runs through our lives and many of the company’s businesses. It was being addressed piecemeal within the organization.

“There is no question there is a bigger investment in music,” Johnson said. “The company is starting to get behind this. It is building momentum and will touch more groups across Microsoft. I’m excited about the opportunity. The company and its platforms are ideal for this, as Microsoft is 100 percent behind this and is doubling down on music.”

With Xbox One, Microsoft is marketing not just a game console but a full-blown entertainment platform. Johnson believes that the future will reveal that entertainment will blur, where you won’t be able to tell what is a game, what is an app, what is a song, or what is a video.

It has been a long slog to catch up with Apple’s iPod, iTunes, and core focus on music. Microsoft tried unsuccessfully for many years with its Zune music players and services. It finally retired that name and launched Xbox Music a year ago with the debut of the Windows 8 operating system. 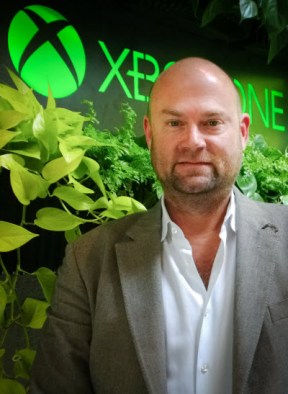 Last year, the company launched a completely revamped digital music interface that matched the touch-oriented Metro of Windows 8, Windows Phone and the Xbox 360. Last year’s update also paved the way for download to own, access service, and a rich radio service. You could manage and curate and control your collection under the brand statement, “All the music you want, any way you want it.” 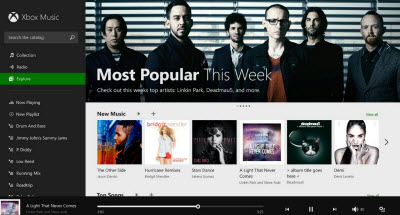 “As we looked back, there are a lot of things we learned from that experience,” Johnson said. “What people want is everywhere they want it.”

On Monday, Xbox Music on the web debuts for free users. It launched a month ago for paid subscribers to the Xbox Music Pass, but now this version will give listeners access to free music streaming on the web, on any web browser, (including Safari, Firefox, Internet Explorer, Opera, and Chrome), on a PC or a Mac. That means that all 30 million songs in Microsoft’s library will be accessible for streaming in all 15 markets that are available. Also on Monday, Microsoft will release its Xbox Music apps for premium subscribers on iOS and Android.

By Oct. 17, when Microsoft launches its major update Windows 8.1 on the PC, Xbox Music will be available on that platform. The company will release Xbox Music on the Xbox One video game console on its launch day on Nov. 22. So by that time, Xbox Music will move from three clients to eight, including Windows 8, Windows Phone, the web, Xbox 360, iOS, Android, Windows 8.1, and Xbox One. All of those moves will help the service spread dramatically in the next couple of months, Johnson said.

“It’s really opening up the ecosystem. One of the primary ways we acquire new subscribers for our $9.99 a month service is through your console,” he said. “It’s pretty much a given people will want that on their mobile devices, too. If they had a Windows Phone, they were set. But this is an opportunity to engage more people by meeting their needs on the mobile device that they prefer.”

Once Microsoft engages with those consumers, there is a better chance they will choose a Microsoft devices, such as a Windows Phone, the next time they upgrade a smartphone. 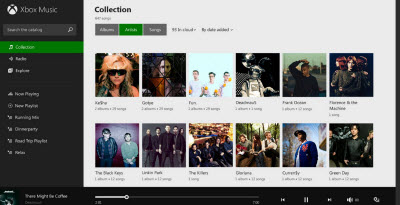 The new Xbox Music has introduced a new navigation bar on the left that lists a bunch of ways to view your collection, explore, and discover new music, search for something you want, assemble a playlist quickly based on your tastes, or play existing playlists. Wherever you see content, whether it’s in the Bing search app, you can simply click on a song and play it.

“We have a simpler grid control now,” with more text as needed, Johnson said. “Now you can browse through 500 albums quickly and play a song instantly. You can scroll up and down your collection and go through thousands of songs.”

Microsoft wants to drive people to build larger collections and discover more music. It believes that its business models and revenues will flow from better consumer engagement. 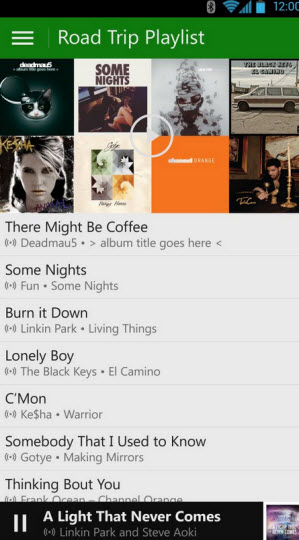 One change is simple. Last year, its Pandora-like service was called Smart DJ. But people didn’t know what it was. So Microsoft tested a new name, Radio, in the Australian market. It found that usage of the service went from 6 percent of listeners using it in a week to 13 percent. Now it is rolling the name change out more broadly. Microsoft did more usability tests and found a couple of things. People expected it to be exactly like Pandora. And they also expected Smart DJ to be something that they would have to learn how to use. But the simple change doubled the usage and got people to engage more. Monetization comes from creating more “stickiness,” or usage, around the paid subscription.

The radio service has ads in the middle if you’re a free user. But paid users see no ads.

Bing searches also pull up more rich details related to music artists when you search for bands. If you search for Landa Del Rey, the artist’s pictures come up, her bio shows, and her songs are displayed. You can click on the Bing search result and start listening to a song from the Microsoft Xbox Music library. 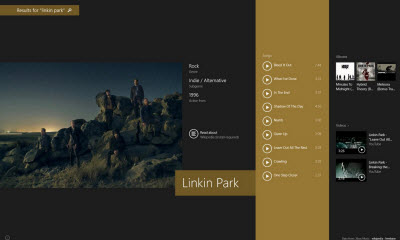 A new Microsoft approach to music

All of these changes are a result of a reorganization in how the company handles music. In the past, music teams were embedded in the various platforms such as Xbox or Windows. But the problem was that those teams had long product cycles, so updates couldn’t happen frequently.

In January, Microsoft brought the music teams together into a couple of locations. A team in Paris handles iOS and Android, while a team in Seattle focuses on Microsoft products. Johnson says that updates to Xbox Music can now happen more rapidly. About 10 percent of the team’s time is now dedicated to “hack days,” where they can work on anything they want and ship them more frequently as needed.

“Now we are more agile,” Johnson said. “We are now shipping every two to four weeks with something new.”

As an example of that agility, Johnson pointed to one new feature that lets you create a playlist based on a web page. An intern had an idea of “What if I go to a festival page and generate a playlist from that page?”

So he created it, working with other junior team members. The feature is integrated with Internet Explorer and Windows. It appeared in a recent keynote speech by Julie Larson-Green, the head of Windows and Xbox, at Microsoft’s Build conference. Now the “web playlist” feature is now one of the top new features in the Windows 8.1 version of Xbox Music coming Oct. 17.

Johnson said that there will be a lot of new marketing coming up to promote the new Xbox Music. It will be touted within Windows 8.1 and Microsoft will engage users through music bands such as Linkin Park, which has more than 55 million Facebook and Twitter users. Microsoft will cross-promote with those bands. Linkin Park, for instance, made an appearance with Microsoft at the E3 video game trade show this year. The idea is to use technology to help the musicians connect with fans and create their content.

“We will work more closely with content creators, artists, and bands,” Johnson said.