Building a company for first-time founders is like jumping into the deep end of the pool without really knowing how to swim. The Lightspeed Summer Fellowship helps aspiring entrepreneurs get their feet wet and buoys them as they take their first strokes.

The venture capital firm has run this program for seven years and the 2013 session is now coming to a close. I spent a day at with a group of the fellows at Lightspeed’s office on Sand Hill Road to learn more about the program, their experiences, and what the future of of Silicon Valley may hold.

Partner John Vrionis started the program shortly after he began working for Lightspeed. Vrionis played professional soccer for years after graduating from college and returned back to the U.S. after stint in England without a clear vision of what he wanted to do. He spent some time working for an investment bank and received masters degrees in computer since and business.

“Most of my entrepreneurial classmates took organized internships at bigger companies and worked on their ideas at night,” Vrionis said. “There were no incubators or accelerators. As venture capitalists, we are in the business of fostering entrepreneurship. I thought if we’ve got office space and available funds, we should give these kids the chance to spend full-time working on their ideas.”

Lightspeed selects about 10 teams a year to participate in the program and provides $5,000 per team and $10,000 per team member, as well as work space, seminars, and mentorship. The firm takes no equity, and the teams are under no obligation to continue working on their idea after the summer ends.

I spent most of the day with Lapshark, a duo of Stanford students building a fitness device and companion application to track swimming.

“This program is like an entrepreneurial gut check,” said founder and recent Stanford grad Aaron Konigsberg. “There is no instruction manual on how to found your own company and build your own product. School gives you the fundamental building blocks, but the challenge is figuring out what to build and how to build it.”

Konigsberg currently has prestigious job offers on the table, but said he is more interested in working on his own projects than being part of a larger organization. He met cofounder Laza Upatising in Stanford’s Computer Science Innovation class, where students learn how to navigate the software design and development process for corporate partners. Upatising’s family lives in Thailand, but he attended high school in Massachusetts and is now a rising senior.

“I never saw my parents when I was younger,” he said. “If you take a set path and work until 6 pm everyday, maybe when you are 40 you will have enough money to raise children. With startups you have control over your own life. You could be homeless for 10 years and never get anywhere and suddenly hit the jackpot.” 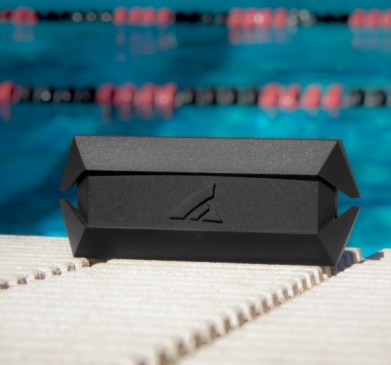 Konigsberg and Upatising worked together on a project for SAP that involved using NFC or Bluetooth low energy technology. Konigsberg ran track for Stanford and lived in a house with varsity swimmers. They saw the popularity of fitness trackers and the quantified self movement, and thought there was an opportunity to create a product that specifically targeted swimmers.

Lapshark is a small, waterproof device that attaches to swim goggles. Each device has series of sensors that passively collects data on strokes, breath count, strokers per lap, pace etc…. to give swimmers and their coaches greater insight into their training and performance.

“Swimming is a fairly data-centric activity,” Konigsberg said. “There are so many metrics that are crucial to understanding how you are performing, but the accessories that work so well for running and cycling don’t work for swimming. Coaches we talk to forbid their swimmers from wearing watches or bracelets, because they can slow you down or hurt someone else in the pool.”

Once they got the idea, Lapshark’s founders began a crash course in building hardware. Both said they had absolutely no idea what they were doing, and spent a lot of time “getting schooled” by suppliers, designers, and manufacturers. Every step from prototype to production was part of the learning process, and they said most of the people they worked with were willing to answer questions and provide help where they could.

In addition to figuring out the logistics of designing and manufacturing a piece of hardware, Konigsberg and Upatising want to build accompanying web and mobile applications that present the data in a clear way, and ultimately provide training suggestions on how swimmers can improve. They are working closely with members of Stanford’s varsity swim team and coaches to get feedback and build a product that they would actually use.

Looking for the next Zuckerberg

After chatting with Lapshark, playing with their device, and attempting to decipher the chaotic-looking whiteboard covered in various tasks, I met a few of the other teams over lunch. One team is building tools to help Bitcoin companies with security and compliance issues, and another called Contastic is building a mobile CRM for salespeople.

Contastic founder Cy Khormaee went to Harvard Business School and worked as Microsoft as an engineer and then a sales person. He wanted to start get involved with startups, but wasn’t really sure where to start. He applied to Lightspeed to build a product for his “tribe.”

“I managed a team of young sales guys and it was like herding cats,” Khormaee said. “Everyone goes in different directions and it was tough to dig into why they couldn’t make sales. My mom was a saleswomen too, and this is a chance for me to solve a problem I really care about.”

Vrionis requires that each team has at least one technical founder. Khormaee came in with a clear problem he wanted to solve and has experience with skills like people management and relationship-building. However most of the Lightspeed fellows are engineers who have had had limited exposure to the business world.

“These kids come and they are super able — you tell them something to build and they will drink 12 cups of coffee to build it in 72 hours — but they have no perspective on how to get to market or sales,” Vrionis said. “18, 19, 20-year old entrepreneurs have only been exposed to so many problems at that age. They chose engineering because they want to keep their heads down and look at screens, so we get them out of their comfort zone and expose them to other ideas.”

Vrionis estimated that twenty percent of the fellows continue on with the original idea they started the summer with. Pinterest’s founder Ben Silbermann participated in the program years ago with a medical startup and there are now over 200 alums, many who later go on to form different startups together. Pulse and Lark are two companies that participated in the program and are still doing well today.

“I didn’t anticipate that so many of these startups would get funded,” Vrionis said. “Some of the ideas don’t have long term potential, but because the kids do, people are willing to throw money at them. I think entrepreneurship is one of the sexier career choices right now, and the fame of being an entrepreneur travels fast. Every VC is trying to be a magnet for the next Zuckerberg.”

Startup success is contingent on so many factors.  A great idea, a large addressable market, and being at the right place at the right time all play a role in whether a startup sinks or swims. Talent and team chemistry are, of course, important as well
.

Stories like Zuckerberg’s, along with a tough job market for college grads, the low cost of running a software startup, and the proliferation of incubator and accelerator programs, has set off a wave of companies founded by young entrepreneurs.

I grew up and went to college on the East Coast. I didn’t know many entrepreneurs and most people I knew followed traditional career paths. They are working as lawyers, doctors, bankers, or working for big businesses.

The fellows that I met at Lightspeed are all young, hungry, and passionate about what they are building. Some of their ideas take off and others will be relegated to the status of “summer project,” but ultimately they are driven by the same desire to forge their own path.

Silicon Valley is often referred to as a “bubble.” My day at Lightspeed reminded me that this bubble also provides a support network where people are supported for dreaming big and taking risks, and where anyone with talent, drive, and an idea can find someone to believe in them, regardless of their age.