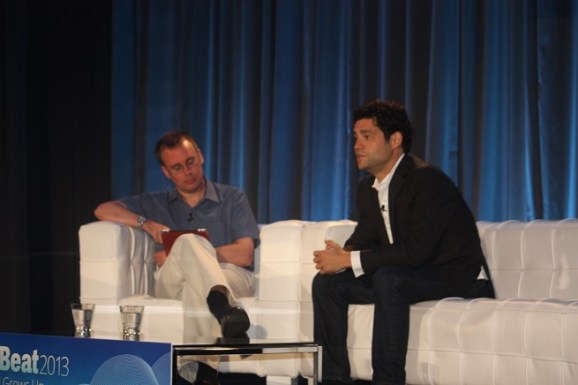 SAN FRANCISCO — Dropbox has established itself as a top cloud storage option for consumers. But that’s a tough, price-sensitive business. So the company has spent a lot of the past year expanding its focus to the enterprise. Ilya Fushman, the head of product for business and mobile at Dropbox, described those changes in a session at our CloudBeat 2013 conference today.

The company has a headstart on a lot of technologies that it needs. It was founded in 2008 and has more than 200 million users. But on top of that, 95 percent of the Fortune 500 are now using Dropbox, as employees are eager to have a comprehensive file-sharing solution that’s easy to use.

Paul Miller, an analyst at consultant at Cloud of Data and moderator of the session, noted how a lot of those enterprise users may be using the cloud storage service in direct violation of company policy.

A recent survey from software development company Spiceworks (PDF) found that Dropbox was the preferred cloud-based file-sharing vendor among both companies and employees. Out of 162 IT admins polled, 40 percent said that they planned to use Dropbox as their official company cloud-based storage solution. But the survey also found that, among employees who are using unsanctioned file-sharing services, respondents said that 93 percent of their employees were using Dropbox.

That’s because consumers are taking something that works at home and are applying it to their daily work. IT managers have to either turn a blind eye to the service or do something about it.

Fushman said that the company is approaching chief information officers and admins to address their concerns and provide them with the tools for monitoring employee usage. In February, the company made changes to its IT admin console to beef up its capability to monitor user activity. It rebranded “Dropbox for teams” as “Dropbox for business.”

Asked what the company has done about security for the enterprise, Fushman said the company has introduced single sign-on, a feature that lets Dropbox fit into existing credential systems. With it, users don’t have to remember their password. Enterprises have to worry about who is able to decrypt the encrypted data files uploaded by users.

Dropbox has launched two-factor authentication, so it’s harder to hack user accounts, and it has enabled IT managers more visibility into what is being done with user accounts and types of sharing activities, Fushman said. The company also hired a lot of enterprise executives.

There are still challenges ahead, as noted in our recent story.

As of August, Dropbox is not yet certified as compliant with data security rules like the Health Insurance Portability and Accountability Act (HIPAA), which describes best practices for storing, securing, and transferring health care data. This makes it an automatic no-go for many companies. (Competitor Box, on the other hand, recently announced that it was compliant with HIPPA). Compliance with standards is a big deal in the enterprise.

One of the ways Dropbox is making itself more useful is by turning itself into a platform. It has more than 100,000 apps available on its platform now for areas such as customer relationship management and collaboration. Developers can access features such as a “syncing engine” that keeps files updated regardless of location.

Back in March, Dropbox bought the e-mail app service Mailbox. Fushman said the goal was to integrate Dropbox more tightly with e-mail services so people can use Dropbox in every context of their lives. With it, people can share data faster and access it more easily.

“E-mail is an important use case for both businesses and consumers,” Fushman said.

Dropbox has also created a partnership with Samsung so that the app comes preloaded in smartphones and tablets. That helps create the convenience of bringing a basic cloud file system to Android devices. That’s important, Fushman said.

Fushman said, “This is a way to get people to engage more with Dropbox. The value isn’t necessarily in being a mobile service. It’s about being everywhere. Our mission is to get you access to your data on any of your devices.”