John Schappert, the former No. 2 executive at Zynga, has gone back to his roots as a game developer, creating a new game startup Shiver Entertainment with funding from Nexon.

The investment is the third major deal that Nexon has cut in a few months, where it has agreed to investment money in and publish titles from startups that have been created by some of the most well-known developers of video games. Besides Schappert’s new company, Nexon has also invested in Brian Reynold’s SecretNewCo and in Greg Richardson’s Rumble Entertainment. The move will take Nexon, which made its name with free-to-play games such as Maplestory, into Western game markets and, possibly, make it a player on the global stage for games.

Shiver Entertainment (named after the word for a pack of sharks) will be based in Miami, where Schappert grew up and not far from the game company, Tiburon, that he created many years ago. It is the latest step in a storied career that included the No. 2 jobs at Zynga, Electronic Arts, and Microsoft’s Xbox business. The new company, founded in December, will make free-to-play games for the PC and mobile devices, and that’s why it’s a good fit within the portfolio of Nexon, the Asian game company that pioneered free-to-play.

“It was a lot of fun working in the big corporate jobs of the past few years,” Schappert said in an interview with GamesBeat. “But the most fun I had in my career was when I started Tiburon and ran game studios working with some of the best creators in the world making some of the most successful games in the world.

One of the unique things about Schappert is that he was one of the game executive who got a start by making games himself. Schappert started Tiburon Entertainment as a sports game studio in 1994. Electronic Arts acquired Tiburon, now known as EA Tiburon, in 1998. The studio makes blockbuster sports titles including Madden NFL, NCAA Football, NASCAR, and other EA Sports titles. Schappert went on to become the chief operating officer at EA, the corporate vice president of Microsoft’s Live Software and Services division (Xbox Live and Microsoft Game Studios), and COO at Zynga.

But Schappert said the Tiburon team began with just three people, and it now has 600 people.

“That makes me really proud,” he said. 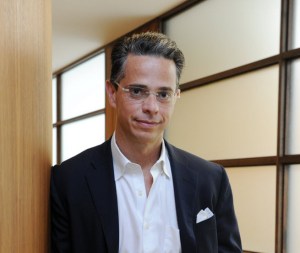 Above: Owen Mahoney, CFO of Nexon

Owen Mahoney, chief financial officer and chief administrative officer at Nexon, said in an interview with GamesBeat that he had worked closely with Schappert at Electronic Arts.

“John is an extremely talented and experienced veteran of the games industry, and he has an extremely long and very distinguished track record of developing AAA franchises in the West,” Mahoney said. “He has experience in free-to-play and he has very been an online person. We share a similar vision for what the future holds in the U.S. and Europe. We think his new company is going to do well. It is an opportunity to expand our business in the West.”

Mahoney will take a seat on the board of Schappert’s company, which will work with Nexon over multiple years and on multiple games. Asked if this third outside developer deal means that Nexon will put less emphasis on internally made games, Mahoney said that wasn’t the case.

“We are very much focused on internal development as well,” he said. “The good news is we don’t have to choose one or the other. When the opportunity to work with John, Brian, and Greg comes up, why not do it all? We also have a lot of internal game development capacity.”

Miami isn’t known for its game companies, but Schappert said, “We’ll have warm weather and water. We had good success in Florida last time.”

Asked what how he summed up his experience at Zynga, Schappert said, “I’ve had the luxury of working for some great companies and great people and seeing the world from different viewpoints. All of that led to what I see as the future: free-to-play. It’s what people want. They don’t want friction. If they put money down, they want to know it is something they want to play. If you give them an incentive to buy something, they will. Tablets and mobile are on a great curve. They enable us to player anywhere and everywhere. And of course, the PC enables us to play the immersive experiences we grew up with.”

But Schappert isn’t tempted to make games for next-generation consoles. He said he loves console games still, and there will be a market for it. He said, “It’s like I still go to movies. But I watch a lot more on my mobile device or my Apple TV in my living room. When I think of the future of gaming, it’s clearly free-to-play.”

Schappert said he will announce some “great new additions to the team in coming weeks.” He also said he wants to get new applicants via joinshiver.com. “If you want to find work at the next great games company and do the next great free-to-play games, contact us,” Schappert said.

Mahoney will speak at our GamesBeat 2013 conference on how Asian game companies are moving to the West.