The day before iOS 7 will almost certainly launch to the public, Apple’s new operating system for iPhone, iPad, and iPod Touch already has 1 percent of iOS web traffic.

I guess there’s a lot of “developers” out there. 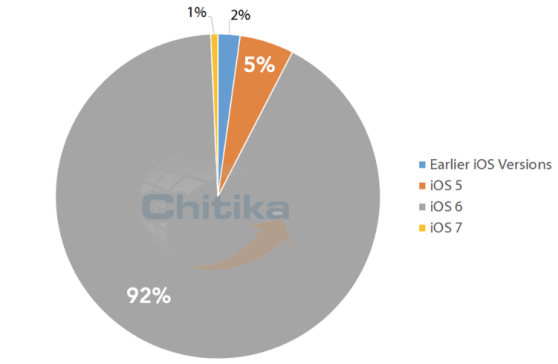 According to ad network Chitika, 92 percent of iOS internet traffic is from Apple’s current standard operating system, iOS 6. A little 5 percent slice is from iOS 5, and 2 percent is from even earlier versions — likely on older devices that cannot receive updates for more advanced OSes. But 1 percent is on Apple’s newest system, iOS 7, which is theoretically only available to card-carrying, dues-paying members of Apple’s mobile developer program.

Apple gives developers early access to iOS 7 for testing, bugfixing, and compatibility checking, and I’ve been using and enjoying it since before June, when I called it “the essence of less.”

Clearly, however, more than your typical developer audience has gotten their hands on this new operating system. 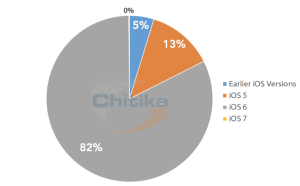 Above: iPad users haven’t been so quick to move to iOS 7, however

Apple users typically are quick adopters of new operating systems, creating a much more unified mobile ecosystem than Android, which has traditionally has significantly more fragmentation of devices and operating system versions than iOS — although that is diminishing.

When iOS 7 actually does become available, it should quickly overtake iOS 6 as the most popular iPhone operating system.

One interesting note from Chitika: While iPhone users are already adopting iOS 7, they haven’t been updating their iPads at anywhere near the same rate. Less than 1 percent of iPad web traffic is from iOS 7-upgraded devices. That matches my personal experience, where I’ve updated my iPhone to iOS 7 but left my iPad, which is less of a continual-use device, on iOS 6.