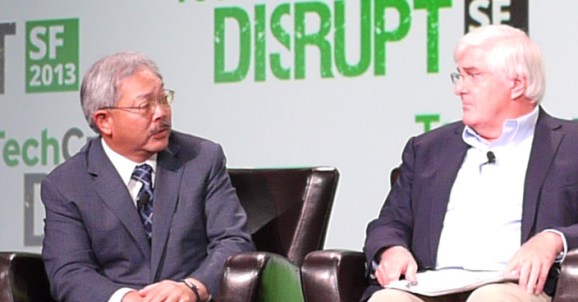 SAN FRANCISCO — Speaking at today’s TechCrunch Disrupt conference, Mayor Ed Lee played the perfect politician, but he did give away one important crumb of actual information: San Francisco is aware that the tech boom in the city is creating even greater economic disparities in the community.

Sitting in front of the tech-only crowd, Lee chose to first focus on the positive, pointing out that the tech community has created more than 45,000 jobs in San Francisco proper and, along with other sectors, has helped get 31,000 unemployed folks back to work.

He also noted mid-Market and SoMa construction and renovation projects that are rejuvenating struggling districts and historic buildings.

But the meat of the conversation came when Lee was asked what he thought about articles like ours that complain the tech industry is having a negative impact on the city’s economics.

“We get these stories,” said Lee, “[that] the rent’s going up, there’s not enough space.” To counterbalance those realities, the city passed Prop C, a $1.2 billion building housing trust fund to build more affordable housing for San Francisco’s less privileged residents.

And that fact alone shows that Lee and the city’s government is planning for and trying to correct the disparity the tech industry has helped to create.

In response to the transportation conflicts, the city is promoting its bike sharing program as well as ridesharing startups like Uber, Sidecar, and Lyft.

With regard to apps that record location and use facial recognition, resulting in very real privacy problems, Lee said, “We need more people discussing this very delicate issue. … We kind of don’t know where it’s going to go.”

With regards to a certain misogynist app built during the Disrupt hackathon, Lee opined, “We’re reminded by these brogrammers that we need to get more women in tech.”