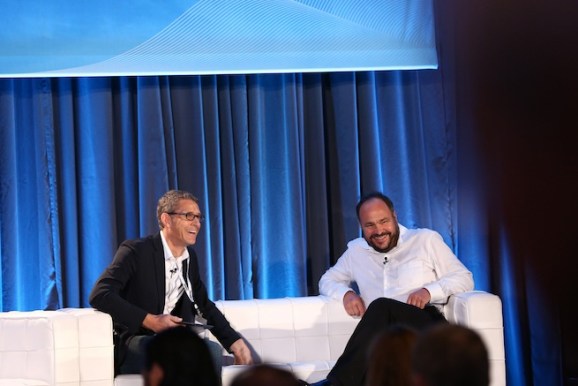 Most of his counterparts are struggling to scrambling to keep up with the big shifts in the sector and fend off the competition from younger players. Meanwhile, EMC made the bold decision to spin out an entirely new entity, Pivotal. Maritz was named to the top position, and received the engineering talent and funds to build an entirely new operating system for the cloud.

Indeed, Maritz is running one of the most well-funded, well-connected “startups” in Silicon Valley. Pivotal launched in April with financial support from major players like General Electric and EMC. Pivotal executives stress that it is still a startup, as they are committed to user experience and lean development.

Maritz made a rare public appearance at CloudBeat on Monday. Onstage, he spoke in fairly broad terms about the cloud. Pivotal is in a position to “take advantage of this unfolding cloud era,” he said.

The thesis behind Pivotal?

Unlike many software-as-a-service (SaaS) startups, Maritz is not building the next Oracle or SAP. Instead, he’s developing a next-generation Linux.

“We’ll see the development and open-source community essentially come up with Linux for the cloud,” he explained. Maritz has worked in the technology industry for decades. He believes that the cloud won’t be immune to the open-source movement.

The cloud will not “go the way of the mainframe,” he said, meaning that one or two developers will not dominate the ecosystem and set the rules. Customers are demanding far more cost-effective solutions, and developers appreciate the flexibility afforded by open-source technologies.

Indeed, Pivotal is betting that “vendor lock-in,” a term often associated with legacy players like Oracle, will be a thing of the past.

“If there is one thing that Ed[ward] Snowden has taught us, global computing won’t happen in one or two U.S. clouds,” said Maritz. “It will be a multicloud world.”

Maritz, who claims that “clouds are the new computers,” is throwing his support behind Cloud Foundry. It’s an open-source project for developers to deploy and scale applications. In recent months, Pivotal has announced some high-profile partnerships for Cloud Foundry, including support from IBM, VMware, and General Electric.

“Developers don’t want to cut themselves off from all these other opportunities,” he explained. “How quickly can the industry respond to that?”

What’s next for Pivotal?

And it won’t be an immediate response. In a 1-on-1 interview after his keynote, Maritz told me that we’re just at the nascent stages of the cloud era.

We’ll see much of these changes play out over the next three to five years, he predicted. Meantime, Cloud Foundry will continue to forge partnerships with major players in the enterprise tech world, so Pivotal can take advantage of the market opportunity.

Maritz intends to continue the work of cloud giant Amazon. He believes the company has done a “great job pointing the way.” But he’s convinced that Amazon isn’t the essential element of the cloud — there is far more to do.

At this juncture, Maritz brings the conversation back to Cloud Foundry. He believes this technology will help companies use a cloud-like architecture to manage huge datasets and respond in real time. “You can’t do things like that on top of a relational database,” he said.

Maritz stressed that there is still no easy, cost-effective way to manage large-scale architectures.

”That’s why we’re positioning Pivotal as a new platform for a new era,” he said.