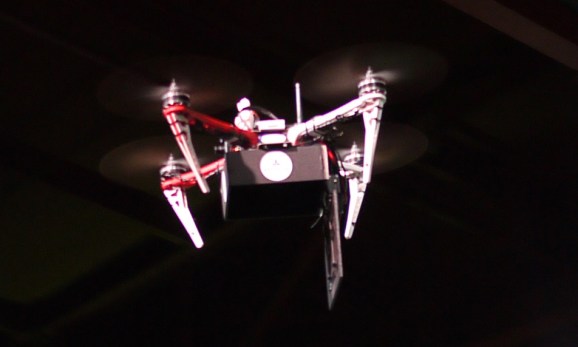 SAN FRANCISCO — At TechCrunch Disrupt today, a panel of connected-device pioneers talked about robots. Not C-3PO, not the Jetsons’ domestic, but the robots of the future, which they feel will look a lot more mundane and not as humanoid as sci-fi fans might have imagined.

“Robotics is about making physical things come to life … with software,” said Boris Sofman of Anki, an intelligent-gaming company. “The projects we think of as the Holy Grail of robotics, the humanoid robot and the self-driving car,” are old ideas that are becoming outmoded by the robotics of contemporary reality.

“A lot of the work we put into it is software to make it really smart,” said Skycatch’s Christian Sanz, whose company makes drone-like helicopters, one of which is pictured above.

“We hired a robotics team to build Nest, because we knew we needed that kind of intelligence,” said Matt Rogers of Nest, the smart-thermostat maker. “We had to pack tons of computing hardware into a device that would last for years,” he continued.

The use cases for the new world of robotics is also not what we might have imagined. Rather than becoming humans’ metal-and-silicon slaves, these devices are becoming our eyes, ears, and hands.

Sanz said he tested the Skycatch drone with a farmer, who was able to see his fields and make immediate decisions. “We never had this data set before. One of my guys says, ‘This is Google Maps, but in real time and high-def.'”

“They understand their environment and behave in a way you would not expect a physical device to behave,” said Sofman.

To that point, the devices are expected to be autonomous, operating without much or any outside control. Again, this requires intense amounts of intelligent software and machine learning.

But there are also concerns around ethics, regulations, and standards, noted Sanz. “A lot of it has to do with the infrastructure … Every time [a drone] goes up, we have to know about it.” Extrapolating that principle, in-home systems need to have privacy safeguards, self-driving cars need to be secure in how they capture location, etc.

Shasta Ventures’ Rob Coneybeer said investors are looking at these kinds of companies with an eye on long-term usability — again, through the power of software, not metal and silicon.

“We look for things that can get better over time,” he said. “These companies push out software upgrades over time. The longer you have these devices, the better they get. … And the more likely users are to recommend it to a colleague.”