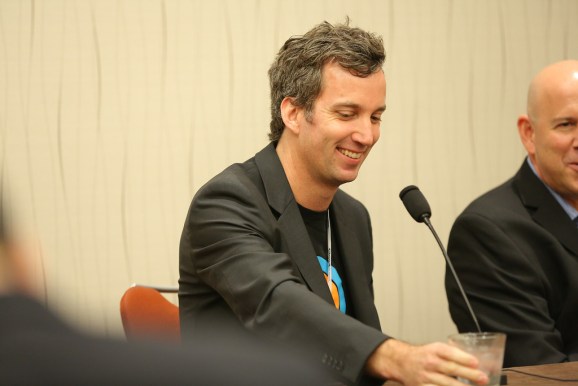 Jamie Sutherland, the president of U.S. operations at Xero, at CloudBeat on Monday.

SAN FRANCISCO — For companies evaluating accounting software, paying less than legacy options is great. Cloud-based Xero can do that, its customers said at VentureBeat’s CloudBeat 2013 conference today. But you get a few other advantages when going with an earlier-stage player like Xero, including support for mobile devices, clearer design, and more responsive customer support.

Jamie Sutherland, the president of Xero’s United States operations, pitched the company as nimbler and more contemporary, and, indeed, more affordable than accounting-software heavyweight Intuit and its Quickbooks. Xero customers sitting on the panel had things to say about that.

“It turned out it was going to be $75,000 within the first three months. After that, $79 a month from that point on,” said Scott Hansbury, the chief operating officer and executive vice president of Axxess Unlimited. In other words, it’s just a bit more affordable than a product with a $500,000 or $750,000 price, presumably the cost of a QuickBooks deployment.

Paying less for accounting software means more money flows toward research and development, Hansbury said. But he and other customers onstage showed how the benefits go beyond money as they spoke of the simple integration with other web applications dealing with money, such as shopping carts for e-commerce and a receipt-collection application.

Xero is still small enough to provide fast answers to customer questions, primarily over e-mail but also over the phone if need be, Sutherland said. And if a customer does have an issue, Xero by nature can adjust its product sooner than a big company with official updates rolling out every few months. A fix might come down the line in two or three weeks, while it would “take two to three weeks to find the right person to talk to at Intuit,” claims Rob Hoppin, the president of Hillenby.

Looking ahead, Sutherland told VentureBeat Executive Editor Dylan Tweney that Xero is building a “conversion service” to get people off of QuickBooks and on his application within a few hours. “Hopefully in the very near future, we’ll be announcing that,” Sutherland said.

The company is now publicly listed in Australia and New Zealand with a market cap approaching $2 billion and $40 million in revenue, Sutherland claimed. Signing up many more customers is a key aim, he said.

The company could find itself hitting snags as it keeps growing, though. Support, for example, could become less intimate as Xero’s customer base swells, and there’s no guarantee prices will stay put as competition heats up. But for now, the company does look edgy and appropriate for cash-starved startups that want to lean on cloud services as much as possible.