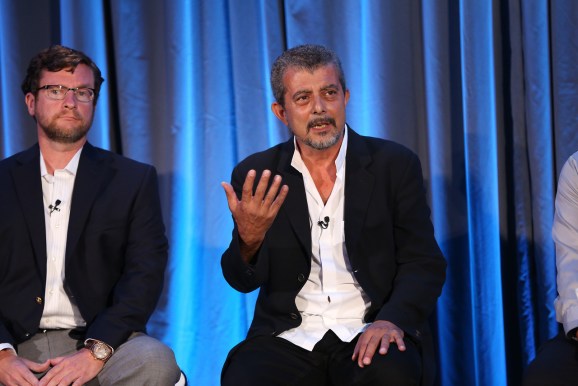 SAN FRANCISCO — When a startup called Numecent launched, the technology media reacted with a combination of disbelief, shock, and downright amazement.

What’s so special about Numecent?

“I was skeptical myself, but [the technology] is indistinguishable from magic,” said the company’s founder Osman Kent.

Kent spoke onstage today at CloudBeat, joined by a customer from the Parsons Corporation, a global engineering and construction company. Kent said that customer case-studies like these will help his well-funded, “disruptive” technology hit the mainstream.

If you’re not familiar with it yet, Numecent offers a new software it calls “cloud paging.” Cloud paging instantly puts anything in the cloud, even an entire operating system like Windows. What this means is that software can run in the cloud — with no modifications — and will run as quickly as if it was installed on your desktop PC.

“We can take take your datasets, and a few days later, a cloud version emerges,” said Kent.

Numecent is pitching its technology to consumers (gamers, in particular) but also to large enterprises. Corporate customers can put their enterprise software in the cloud without needing to spend millions of dollars on an annual license with a software vendor.

Damon Donnell, an engineering director at Parsons, said his company saved millions by using Numecent. According to Kent, the cost savings was roughly $50 million.

Parsons claims it is only operating two servers to deliver four million huge computer-aided design (CAD) files to nearly 12,000 employees. By using Numecent, Donnell reports that his team has been able to focus resources on design and engineering rather than configuration.

Numecent’s team have repeatedly stressed that the technology can reach millions of users with very little server footprint.

As of this summer, early customers can opt to install the Numecent tech in the data center, like Parsons, or they can access the tech through Amazon’s cloud service (AWS).

Another benefit for customers is that Numecent reports it can make an app run faster, and it will continue to work when the network is down. “We are roughly 1,000 times more server and network efficient,” Kent said.

Numecent is a threat to legacy virtualization vendors, and it recently raised over $14 million to market its technology. The company spun out of a cloud-gaming startup called Approxy in 2012.