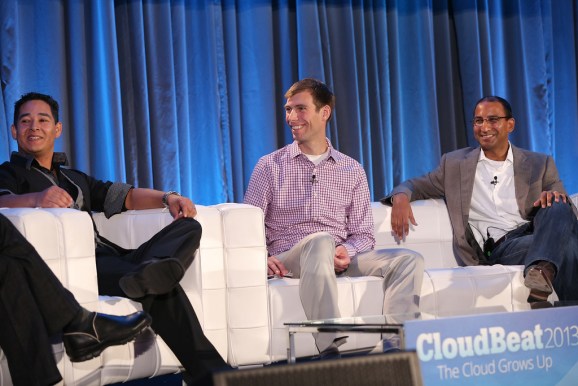 Peter Lopez (left), the system architect at Disney Interactive, talks about his use of OpenStack and Cloudstack at CloudBeat 2013.

SAN FRANCISCO — Disney Interactive wanted more privacy than what would’ve been possible through a public cloud, and thus it went down the private route. But instead of going with one vendor or open-source environment, the video game division of the Walt Disney Co. created a solution stitching together some OpenStack and some Cloudstack, said Peter Lopez, Disney Interactive’s system architect, at CloudBeat 2013 today.

Disney Interactive comprises a portfolio of game studios it has gradually acquired, Lopez said. So its cloud must be hybrid, but not in the sense of incorporating shared infrastructure from vendors such as Amazon Web Services as well as on-premise gear. Rather, it needs to support applications built in multiple environments. In other words, a studio with applications running on OpenStack and another with Cloudstack programs can both easily port over to the Disney Interactive cloud.

The cloud that Disney’s stitched together takes advantage of the large OpenStack ecosystem, to which lots of developers contribute. And Cloudstack by now has been altered to account for needs from enterprises using it, said Sameer Dholakia, the vice president and general manager of cloud platforms at Citrix. That leaves Disney Interactive to devote more resources to its specialty of making games, rather than having to throw teams of developers at the problem of cobbling together a fitting solution.

With help from SwiftStack, Disney Interactive runs “a storage system that consolidates and gets to a single point of management and visibility.” Important identity and security protocols such as LDAP and single sign-on run across the board, he said.

It might seem that vendors focusing on OpenStack or CloudStack would want a simple environment, but Joe Arnold, SwiftStack’s founder and chief executive, said he sees “an opportunity for us to come together, to work together, for a joint solution.” And that’s a wise perspective for any young leader who wants to pick up business from enterprise-scale companies.