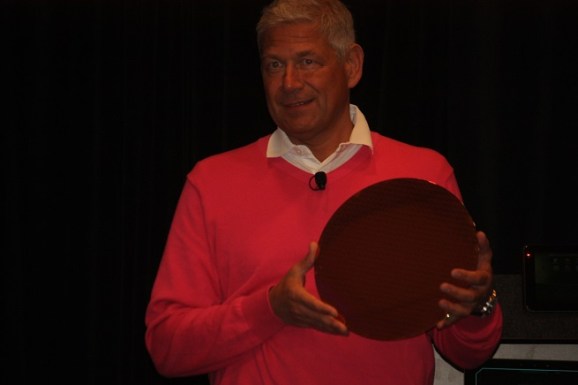 SAN FRANCISCO — Intel spilled the details on its codenamed Bay Trail family of processors today at the Intel Developer Forum. The world’s biggest chip maker believes that it will be the foundation of the company’s expansion into thin laptops, two-in-one laptop-tablet hybrids, and high-performance tablets.

The new chips, officially dubbed the Atom Z3000 series, are based on 22-nanometer manufacturing and Intel’s Silvermont architecture. (A chip architecture can be used across multiple categories, like servers, laptops, and mobile). The chips will come in dual-core or quad-core versions and have twice the CPU performance and three times the graphics performance of the previous generation.

“We expect 8-inch tablets to be as thin as 8 millimeters with this chip,” said Stephen Smith, the general manager of tablet development at Intel. “You can get a 10-hour active battery life and three weeks of standby time. You get instant responsiveness that we all want.”

It supports 3G and LTE, and one version will have the Intel 7160 LTE modem built into it. It can operate at clock speeds up to 2.4Ghz and run screens with resolutions of 2,560 pixels by 1,600 pixels. The Z3000 chips will appear in devices with 7-inch to 11-inch screens.

The chips will be used in Windows 8.1 and Android devices, some costing as little as $199. The 64-bit versions of the Z3000 are coming in early 2014. Intel will also offer Bay Trail-M and Bay Trail-D processors in the future. Those will extend the Intel Pentium and Celeron brands for low-cost laptops and desktops.

One of the features is out-of-order execution, which enables faster performance. Intel has six versions of Bay Trail coming. Intel said there are 141 designs for devices using Bay Trail in the works. You can expect to see thee machines debut in the fourth quarter.

As the PC market growth slows down, Intel has high hopes for breaking into tablets, which is dominated by companies such as Apple and Samsung with chip vendors using the rival ARM architecture.

“The market for tablets is changing from one type to multiple,” Eul said. “We are here to enable choice. So far, there wasn’t so much choice.”