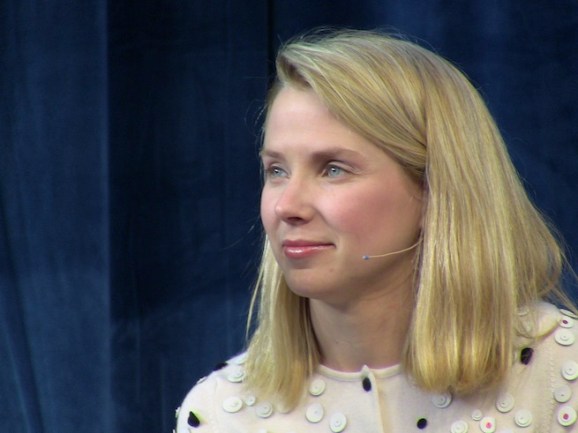 “I am a happy if not happier at Yahoo [than I was at Google].”

“When I look at the state of the company, I said it would take three or more years to get the company going in the direction we wanted. But there’s been a chain reaction,” she said, due to four factors: Hiring the right people to build the right products, which generate traffic (800 million monthly active users, not including Tumblr and largely due to mobile), which leads to revenue.

The result, aside from revenue, has been a string of revamps and product launches that position Yahoo as a contender for consumers’ time once again — and not just for legacy users stuck in Yahoo Mail.

Acknowledging the company’s recent spree of M&A deals and acqui-hire strategy, she also said Yahoo gets 12,000 resumes a week – and Yahoo only has 12,000 employees.

Mayer polled the room of tech-forward attendees and judged about half had used a Yahoo product in the past month, dispelling the myth that “the cool kids” don’t use Yahoo. A lot of that, Mayer pointed out, is due to redesigned and new apps for mobile platforms.

“The big piece I’m focused on is mobile. We’ve grown our mobile team by a factor of 10,” she said. “We’ve always had the web; we want to bring it to the phone … and also new use cases for mobile.”

Speaking about Microsoft, currently a captainless ship, Mayer said, “I don’t know what the board is considering, but when I look at their product line, I see a lot in the enterprise arena. … I hope they are looking for people who are really strong in the enterprise business.”

Regarding her perceived shortcomings as a relatively new CEO, she said, “There’s a community of CEOs, and CEOs really do want to see each other succeed. … And one of them said to me, ‘The thing that’s shocking about the role is how few decisions you have to make, but you have to make them perfectly.’ … I should be making fewer decisions.”