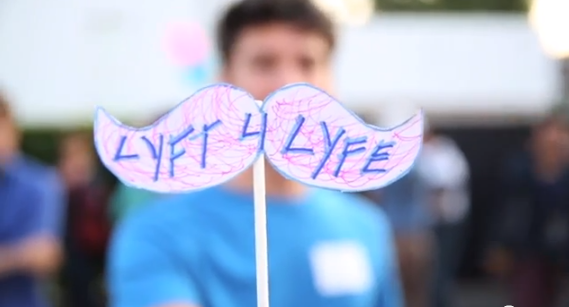 “I am readying for a fight.”

These are brave words from a beleaguered man, Lyft CEO John Zimmer. I’ve interviewed him enough times to tell you that he’s not a belligerent type. He’s developed a thick skin and a patient attitude after dealing with years of resistance from taxi companies and city governments.

But as Zimmer prepares for more regulatory battles, he’s counting on foot soldiers like you — everyday ride-sharing consumers — to keep his company in one piece.

It’s a strategy that other ridesharing companies are adopting as well. Crowdsource a political movement to mobilize for you company and you might develop enough grassroots support to shift political support in your favor.

During a visit with Zimmer at Lyft’s San Francisco headquarters, we talked about how regulators are enacting laws to run the company off the road in various cities, claiming that consumer safety is at risk. Lyft is a commercial ride-sharing service that anyone can use to hail a ride — not a cab but a person in their own car — through a smartphone application. Such services claim to undercut the middleman and lead to more efficient markets. In a country famously defensive of laissez-faire economics, bureaucrats are getting an awfully large say in how Lyft does business.

Above: Lyft cars are easy to spot.

Lyft competitor Uber is facing similar threats across the U.S. — and abroad, as it plots global expansion in South America and Europe. Chief executive Travis Kalanick recently said that he often forgoes sleep when “two or three flare-ups happen in the same week,” and he has to fight regulators who “propose laws that would put us out of business.”

However, investors are convinced that this just the beginning for ride-sharing. Venture firm Andreessen Horowitz made a $60 million bet on Lyft this summer, and Uber just raised an impressive $258 million from Google Ventures and TPG, which has been earmarked for further international expansion.

But if regulators are skeptical, investors say that ride-sharing has a strong weapon in its arsenal: the community. A vocal subset are fighting in cities around the world for ride-sharing to succeed.

“This community support is overwhelming, and one of the reasons that we were confident to invest in Sidecar,” Justin Caldbeck, an investor at Lightspeed Ventures Partners, said in an interview.  “Communities are demanding that their legislators support ride sharing.”

Caldbeck has extensively researched the ride-sharing space, which he believes can provide flexible employment to safe drivers with access to a car. The national employment rate remains high, at roughly 7.4 percent. Lyft and Sidecar drivers typically make $20 to $40 an hour.

Likewise, Andreessen Horowitz partner Scott Weiss told me that “community was a key part of our investment thesis for Lyft.” Weiss finds encouragement in the fact that Lyft fans regularly connect online and in person at meet-ups. For instance, in the video below, Los Angeles residents gathered to show their support for Lyft.

Let’s take alook at how this strategy is playing out in two key states for the ride-sharing movement, California and Colorado.

Uber’s CEO was recently spotted in Colorado, a state with liberal pockets and growing grassroots support for ride-sharing. He spoke with an audience of tech entrepreneurs at Fortune‘s Brainstorm Tech, arriving in style in a fancy black town car. At that conference, Kalanick formally announced that Uber had arrived in Aspen.

“Outside in, customers speaking on their own behalf, talking to the people that make policy or make regulations.  We’re very, very good at getting people to speak out about things that we feel are wrong,” Kalanick said in response to a question posed by Change.org’s communications director Charlotte Hill. Uber currently uses Change.org, and its customers frequently start petitions to urge Uber to launch in their city.

Change.org is a platform for anyone to start a petition against a corporation or government agency. On Change.org, you can sign petitions virtually, make comments on a petition, vote comments up and down, Reddit-style, and recruit other supporters. The platform enables people to mobilize online around a cause, share it with the community at large, and put pressure on the powers that be.

Community members have started petitions and won campaigns against Bank of America, Verizon, Google, and Facebook. Change.org has also won battles against various regulatory bodies. Online petitions have been started by Uber and Sidecar executives.

I contacted Uber to expand on that quote, but Kalanick would not comment further about how the company is leveraging Change.org in Colorado or in other states. However, an Uber spokesperson pointed me to a Change.org petition formed by Uber’s Dallas team this week to fight regulation in Texas. That petition has already amassed 3,000 signatures. Uber’s Denver-based general manager started another Change.org petition over six months ago, urging Colorado residents to reach out to local legislators. Over 2,800 people signed that petition.

On the Dallas petition, the most popular sentiment from a community member places blame squarely on the shoulders of cab companies, accusing them of being in cahoots with the local government.

These petitions position Uber as the little guy, being stomped on by regulators and monied interests.

“If cab companies have a problem with Uber, they need to adapt and change, not change the laws to fit their agendas,” wrote Shannon Moffett, a Dallas resident, after signing the petition.

Kalanick is also pursuing more traditional political channels, working from the top down as well as bottom up, by hobnobbing with Colorado Gov. John Hickenlooper (D). He has repeatedly stressed his support for technology and entrepreneurship in the region. (Read our recent interview with the Hickenlooper here.)

Read on for more on the regulatory battles in Colorado, and the journey ahead for ridesharing startups

The video below is Kalanick speaking at Fortune’s Brainstorm Tech.