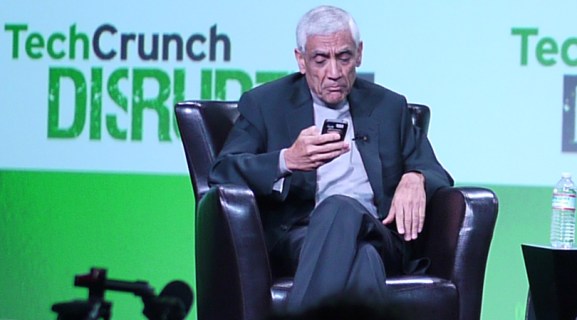 He thinks it’s for the best. “It saves me a lot of time listening to other VCs,” he said onstage today at TechCrunch Disrupt today.

“They give advice to board members as if they know, and they haven’t done shit,” they said. “They’ve never been at a startup, they haven’t been through tough times.”

His advice to founders: “Listen politely, and then do what you want.”

If you think that’s a slam, this quote will blow your hair back: “Maybe some percentage, larger than 95 percent of VCs, add zero value, and 70 percent of VCs add negative value in advising.”

If that kind of talk gets you going and you want to work with Vinod’s VC firm, he’s got a word or two for you, as well.

“Doing things at the edge is what venture is about,” said Khosla, “Things that are likely to fail. That is very much the philosophy of Khosla Ventures.”

As for overadvised clones and safe bets, he said, “If you’re doing what everybody else is doing, you’re not doing anything interesting, and we won’t want to invest.”

He also thinks of journalists as “English majors who can’t do real work.” Ahem.

But he also schooled the perpetually zaftig Mike Arrington on the benefits of plant-derived food. We feel better now.