If you were among those wooed more by Apple’s candy-colored iPhone 5C than by the higher-end iPhone 5S, today’s your special day.

As expected, carriers are heavily pushing why their respective versions of the 5C offer the best deal.

For Sprint, buying the iPhone on the carrier’s network means getting unlimited data, text, and calling “for life.” The company also claims that subscribers can save up to $360 per year on its My Way plan compared to plans offered by its competition.

Verizon’s argument is that the “iPhone deserves the best network,” which it says it has. The company also touts its Verizon Edge early upgrade program (which isn’t the best deal) as well as its Share Everything plan. 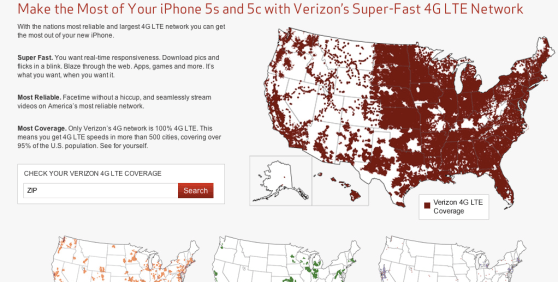 AT&T and T-Mobile are playing it a bit more conservatively. They don’t have dedicated pages about why consumers should buy the iPhone through them. AT&T, however, does offer customers the option of buying the phone through the Next early upgrade program (one upgrade a year) or through a two-year contract.

T-Mobile’s modest approach is a bit more surprising, considering that this is the first time it’s launched an iPhone alongside its competitors. The company didn’t get the iPhone 5 until this April — eight months after everyone else. Still, T-Mobile says that buying the iPhone 5C on its network means buying into its “uncarrier” approach, which in this case means being able to buy the 16GB iPhone 5C for no money down before 20 monthly payments.