In the console war, the PlayStation 4 will go head to head with the Xbox One in November. But before that, we’ll see a very different kind of competition across platforms. Grand Theft Auto V debuts on the consoles on Sept. 17. Apple’s iPhone 5S ships on Sept. 20, with Infinity Blade III (pictured at top) shipping on Sept. 18. And the competition between the two will tell us a lot about the changing nature of the gaming landscape.

Grand Theft Auto V is a huge open world where you can live out criminal fantasies and build a underworld empire. It will be played on consoles on the big screen in a living room. With Infinity Blade III, you can hack away at beautiful dragons by swiping your fingers on a relatively tiny 4-inch iPhone 5S touchscreen.

In the past, it was very easy to argue that these two games appeal to very different audiences. It was laughable to compare the quality and immersiveness of console games and mobile games. Mobile games have been snacks, not platforms where you play for hours at a time. Consoles games like Grand Theft Auto V are like 17-course meals.

But I believe these two games will be head to head competitors in the age of the Battle Royal, or the cross-platform competition that comes with the era of digital games. The Battle Royal is our theme for our GamesBeat 2013 conference coming to Redwood City, Calif., on Oct. 29 and 30.

When you look at both games side by side, you may wonder: Which game could generate more sales, the $60 console game, or the $7 to $10 mobile game? 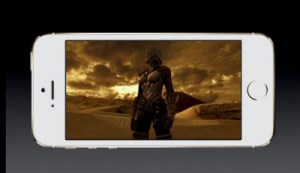 The past two Infinity Blade titles have sold tens of millions of copies over the past three years. We don’t know exact numbers, but let’s call that 20 million units at $7 each, or $140 million in revenues. Grand Theft Auto IV, released in 2008, sold maybe 25 million units at $60 each, or $1.5 billion. That’s no contest, right?

Maybe not. Already, Puzzle & Dragons from Japan’s GungHo Entertainment is on its way to $1 billion in sales, and it is generating around $5 million a day. The mash-up of match-three jewel puzzles and role-playing games has been a hit in Japan, but it is monetizing worldwide. Far more people will try a game like Puzzle & Dragons, compared to a console title.

In some ways, eyeballs matter as much as dollars. Mobile device sales are far outstripping console sales. Consumers activate about 3.7 million mobile devices every day, according to Intel. Console makers are content to sell that many in a quarter. Moreover, kids are being raised on iPads and iPods these days. They’re bypassing the Nintendo handhelds and moving straight to the devices their parents use. In the future, these kids are going to be more comfortable playing with touchscreens than game controllers. That day  is coming sooner than we think, according to market researcher NPD.

When it comes to quality, mobile games aren’t a joke anymore. With the advances of the iPhone 5S, Apple has made it possible create hardcore mobile games that cater to traditional console gamers. As GamesBeat’s Jeff Grubb wrote, the 64-bit A7 and speedy graphics inside the iPhone 5S will enable game makes to compute a lot more data in their games than in the past, giving them a more powerful canvas.

The iPhone 5S CPU is 40 times more powerful than the original iPhone, and the graphics are 56 times better, according to Apple. Epic Games’ Chair Entertainment division ported their 32-bit code to 64-bit code in two hours. Infinity Blade III will feature graphics details such as depth of field, motion blur, lens flares, and realistic fire. Those are features that were once solely visible in PC and console games. 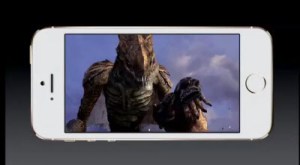 Of course, I’m betting that Grand Theft Auto V will feature many more hours of entertainment than Infinity Blade III, which will eventually bump into the limits of memory on a mobile device. But who has the time for that?

The irony is that Apple could accidentally assassinate the console game business. Its real target is Google and its Android operating system. The console games might take a hit just because they’re in the way.

I know there are people out there who disagree with the premise of my supposition that these two games are competitors. John Riccitiello, former chief executive of Electronic Arts, will be holding a fireside chat with me at GamesBeat 2013 with the title, “Is mobile versus console the right question?”

But we only have so much time in a day. Clive Downie, head of DeNA West, recently pointed out at the Casual Connect conference in July that there are only 1,440 minutes in a day. Entertainment is going to grab a small slice of that. And at some point, the time dedicated to console games or mobile games is a zero-sum battle.