Levie kicked off the annual Boxworks conference this morning with his usual flair, cracking jokes at Microsoft’s expense. He proceeded to reel off a number of new products, including a service in beta called Box Notes. This notetaking tool has already grabbed the most attention from the media, as it’s a potential competitor to incumbent players like Evernote and Google Docs.

These announcements are just the tip of the iceberg, and Levie had far more to say about Box’s strategy. So Box invited a few members of the press to sit down with Levie, and learn more about the company’s long-term goals, and how it will outpace the competition.

A full run-down of the new products and services announced at Boxworks here. 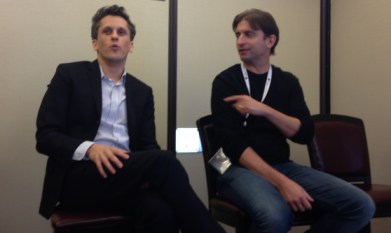 Above: Aaron Levie [left] and Sam Schillace, who many credit as the inventor of Google Docs

During his keynote, Levie invited executives from Crocodoc and Folders to the stage. These entrepreneurs now work as product managers for Box, as it acquired their startups earlier this summer.

Like every fast-growing startup, Box has struggled with whether to “build or buy.” Levie told us that he still prefers to build when it comes to augmenting the core product. But he’s open to acquiring a smaller company that is innovating in an adjacent area.

Levie hasn’t ruled out further acquisitions in the near future, but he intends to be cautious. Cultural fit matters; it’s not just about adding engineers. He said that recent acquisitions of Crocodoc and Folders brought “unique talent to the team.”

“They are both entrepreneurs [and] change up the teams around them. I think we need a little of that,” Levie said.

Box intends to make further announcements about expansion to new markets during Boxworks. We will keep you abreast of the news as the conference progresses.

Levie didn’t say much, but he revealed that the company has been outperforming in Europe and will continue to hire for the London office. In addition, Box has earmarked Japan, Australia, and Brazil as strong potential markets for international growth.

At Boxworks, the company unveiled a new notetaking service, dubbed Box Notes. This product has received the greatest share of attention in the press. Some reporters claim it’s a potential competitor to Evernote and Google Docs.

Box Notes is cool, but in my opinion, it’s no Google Docs rival. Box Notes is intentionally simple — it does not have the full set of features that employees expect. It’s more akin to a TextEdit in the cloud.

From a strategy perspective, however, it’s fascinating that Box is moving into the content sector. The company is closely monitoring the feedback from its first set of customers and will determine whether to augment Box Notes with a few more features.

Levie said the company has been testing Box Notes internally for about six months. “We are putting information and content at the center of the experience,” he said.

On a public offering

Levie issued a safe and somewhat expected response when asked about IPO plans. Press have speculated that we should expect a public offering in 2013 or 2014 (far more likely).

“Our goal is to be a long-term, independent company,” Levie said. “We are paying close attention to Twitter’s IPO.”

On keeping the experience simple — yet attacking tricky sectors

Box’s go-to-market strategy is a smart one. It noticed that its technology was increasingly adopted by large industries, like health care and education. To avoid a security breach or regulatory pushback, Box has focused on these industries and brought on experts in those fields.

Over the past year, we’ve seen Box expand to health care and education. Its technology is now HIPAA (Health Insurance Portability and Accountability Act) compliant, so doctors can feel confident sharing sensitive patient information in the cloud.

When asked about how Box intends to keep its user experience simple — and yet appeal to employees working in a broad range of sectors — Levie said the company relies on its partner network. Box is not developing a health care API or rolling out a new set of products for physicians. Instead, it is working with health IT partners to build new applications for care providers and large hospital networks.

The company is also bringing on consultants to offer advice on reaching these new sectors. Missy Krasner, a former Google Health executive, is currently helping the company fine-tune its health care strategy.

“On the product side, we try to stay as horizontal as possible,” said Yeh.

On Box for Android — not just iOS

Box’s recent acquisitions will augment its mobile offering for iOS (Folders, for instance, is an iOS-only client for Box, Dropbox and Google Drive).

According to Schillace, it’s simpler and more sensible to focus on one platform first. Box is clearly targeting its development and design efforts on improving its iOS app. The company will release a full upgrade to the App Store later this year.

Both Schillace and Levie stressed that they don’t intend to ignore Android or any other operating system. They also explained that iOS isn’t its preference, but since Box happened to acquire two companies focused on that platform, it made sense to dive into it first.

We’ll be reporting live from BoxWorks, which takes place on today and tomorrow in San Francisco. Check out our coverage on VentureBeat for more cloud announcements from the conference.