Levie began his talk by cracking jokes at the expense of legacy giants like Oracle and Microsoft. The audience of several thousand people was in fits of hysterics when, straight-faced, he suggested that Clippy, Microsoft’s mascot-like Office assistant, should replace Steve Ballmer.

Joking aside, Box executives stressed at Boxworks that they are serious about competing with giants, including Sharepoint and Google Docs. Levie said that most enterprise companies have “overshot” when it comes to building tools that employees need today, meaning that most products are too expensive and have more features than many need. He frequently says that enterprise software “needs to be easier to use” and on par with the fastest growing consumer-focused technologies.

Box has a strong base of consumers using its cloud tools, but it’s best known for pervading large businesses in a variety of tricky sectors, including health care, education, and government. In part due to Box’s heightened security (Dropbox has been critiqued in the press for a series of high-profile hacks), Levie announced Monday that 180,000 businesses are using his company’s product.

Levie invited executives and product managers to the stage to make the following announcements at Boxworks:

Box Notes will likely gain the most attention, as it has been positioned in the press as a potential competitor to Evernote and Google Docs (I beg to differ — read my oped on the subject here.) The company today announced that it has now added content creation to its storage and collaboration service. With Box Notes, you can take notes and annotations as well as add images.

While available for consumers, Box developed Notes for the workplace. Doctors can use it to take notes about a patient — it is one of the first products from Box that complies with the Health Insurance Portability and Accountability Act of 1996 (HIPPA).

The technology is still in its beta-test stage, so it’s likely to develop based on the feedback of its early customers. Enterprise general manager Whitney Bouck stressed in an interview, prior to BoxWorks, that it’s not intended as a cloud version of Microsoft Word.

“It isn’t meant to be a full office-editing suite,” said Bouck. “It’s not really as feature rich — you could argue that you don’t need that functionality.”

This announcement isn’t a huge surprise for anyone who’s been following Box acquisitions and hires. The company recently brought on Sam Schillace, who’s received credit as the mastermind behind Google Docs. Bouck told me that the company has also benefited from consulting services with Steven Sinofsky, the former head of Microsoft Windows. 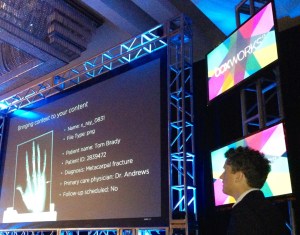 Above: Box CEO Aaron Levie looks on as an employee demos the new Meta Data product.

A Box product manager pulled up an image of an X-ray, stored in Box. The company believes that people can glean information from files, but it’s hidden. This information is known as metadata.

From this week, Box customers will automatically be able to view this metadata. The metadata of that X-ray file, for instance, shows that the patient is star NFL quarterback Tom Brady, and the diagnosis is a metacarpal fracture.

Onstage, Levie repeatedly referred to this feature as bringing “context to content.”

Box believes this feature will prove to be particularly useful for employees at government agencies, insurance companies and law firms, as it will help them process claims quicker.

Box repeatedly stressed its focus on mobile, with Levie predicting that there will be 1.3 billion mobile workers in 2013. The company won’t release its new iOS app until later in the year, so he spoke in broad terms about the importance of getting the mobile experience “right.”

The new app will bring “that simplicity and usability. It will define our mobile experience,” said Levie.

In addition, the company invited the chief executive of Folders to speak onstage. Folders is the document-embedding service Box acquired in May. Box revealed that it has also integrated much of this technology to make it easier to share files (including high resolution photos) on mobile and on the go.

As we reported, Box acquired a startup called Crocodoc in May to turn boring documents into HTML-enhanced interactive experiences.

Levie announced today that the Crocodoc technology has been fully integrated into Box’s cloud products. Now, using the new and improved Box preview, employees can take any PDF (as an example, Box pulled up Sharepoint’s 75-page instruction manual, inviting yet more laughs from the audience) and preview it online. In another click, employees can make changes to the document using BoxEdit, or make notes in the column.

With the new Box Preview, employees can continue to read a document with no Internet connection. Workers can also copy and paste any part of the file, and share it online or on the desktop.

We’ll be reporting live from BoxWorks, which takes place on today and tomorrow in San Francisco. Check out our coverage on VentureBeat for more cloud announcements from the conference.