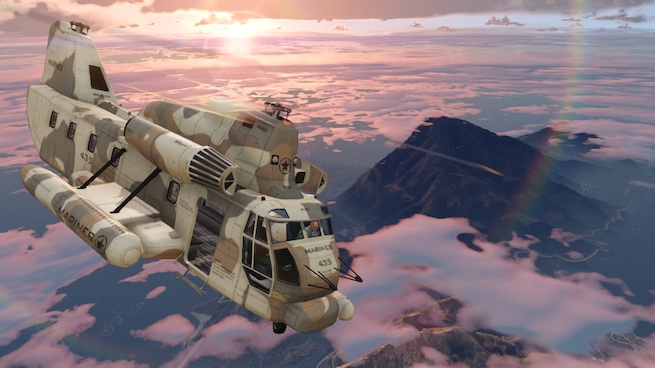 Above: You can travel pretty far up into Los Santos’s skyline.

Uncomfortable brush with reality
I’ve always considered GTA games like cartoons. They’re super violent, but they’re also foul-mouthed and silly looking enough to not take them too seriously (like South Park). But now that it looks and sounds better than it ever has, I’ve reached a point where I’m uncomfortable doing certain things. Take the prostitutes you can have sex with in your car. In past games, I picked them up, watched them do the deed, and then killed them to take my money back. It didn’t faze me at all.

When I tried that in GTA V, it just felt wrong. I stabbed one of the women with a knife after she walked out of the car and stared at her body on the ground for a few seconds. I couldn’t dismiss it as just a comical death anymore. I immediately thought, “Wow, I’m a horrible person in this game.” Another moment that gave me pause was during a scene where Trevor had to torture a guy by using a set of squirm-inducing tools: pliers, a gas can filled with water, jumper cables, and a sledgehammer. After my initial disbelief passed, a feeling of dread set in. It didn’t feel good at all to hurt him. That could be what the game designers were going for, since the scene does fit with Trevor’s personality, but that doesn’t make it any less gross to see.

Everything else I did in GTA V — shooting, blowing up mercenaries, running over pedestrians — didn’t bother me. It was the intimacy of those encounters, putting me face to face with my victims, that forced me to take a step back and think about what I was really doing. Your reaction might differ, as a lot of this comes from my own changing views over the years. Violence for violence’s sake just doesn’t appeal to me anymore.

To be clear, I’m not calling for censorship or anything like that. I know some of these acts are optional. And for whatever reason, other brutal games (like The Last of Us) haven’t affected me in the same way. I just think we’ve hit a crossroads of sorts with the Grand Theft Auto series. As the graphics get better — and the blood becomes more viscous and the injuries become painful to watch — the violence looks more real and gut-wrenching. The fact that all this takes place inside of a world that satirizes our own only seems to enhance, and not diminish, what we see and do onscreen.

Wasted space
As big as GTA V is, I can’t help but feel like Rockstar underutilized some of the locations. A lot of the missions happen either in Los Santos or a desert area called Sandy Shores, with a few encounters sprinkled around both counties. But because of this, a few of the smaller places go by unnoticed, barely serving any purpose for the story. Places like Little Seoul (a Koreatown), Vespucci Beach, Del Perro Pier (boardwalk with carnival rides), and the mountainous regions are pretty to look at and may have one or two objectives, but that’s about it. You can hardly interact with anything in those areas.

Not enough heist missions
As fun as I had with planning a heist, you don’t get too many opportunities to do it. I don’t remember the exact number, but you only do around five or six of them. You can double that by replaying them to see what happens if you made the other choices, but I wish GTA V had a larger pool to pick from.

Dying between long checkpoints
Another consequence of GTA V’s huge map is how much you have to travel during some of the missions. If you happen to die — while accidentally crashing your vehicle, suffering bullet wounds, or getting stuck in the occasional glitch — you have to make the long trek all over again. It’s annoying the first or second time it happens, but each successive death increases the frustration. 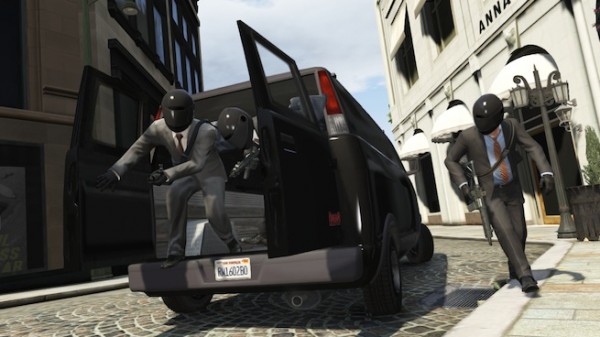 Above: Heists are one of my favorite parts of the game.

Time just melted away as I lived a second, third, and fourth life in GTA V. The experience consists of more than just crimes. I played tennis, enrolled in a flight school, captured fugitives, watched movies, and towed cars. A lot of that doesn’t sound fun on paper, but they bring some semblance of real life to a world that otherwise runs on its own bizarre rules.

Michael, Franklin, and Trevor embody the best and worst of what Los Santos and Blaine County have to offer. They’re not heroes, but despite my conflicted feelings, the engrossing narrative pulls you into their personal lives and the violent conquests they embark on. You’re both a witness and accomplice in their crimes. Depending on your personal tastes, that can come off as being repulsive, funny, or somewhere in between. You can also just ignore the story completely and spend hours looking for Bigfoot again in the mountains.

Exercising that freedom of choice is what helped launch Grand Theft Auto to popularity in the first place. Rockstar doesn’t always hit its ambitious goals, but it comes pretty damn close, and that’s enough to make Grand Theft Auto V its finest GTA game to date.

Grand Theft Auto V is out Sept. 17 for the Xbox 360 and PlayStation 3. The publisher provided GamesBeat with the PS3 version for the purpose of this review.