David L. Craddock is author of Stay Awhile and Listen, a new book series about the history of Blizzard Entertainment and Blizzard North and the making of the WarCraft, Diablo, and StarCraft games. He wrote this piece for GamesBeat.

Blizzard Entertainment has built a reputation for crafting addictive and immaculately polished games, leading many to believe that the veteran developer has perfected a formula for fun. Appearances can be deceiving.

During the early days of Blizzard Entertainment and Diablo developer Blizzard North–founded as Condor in 1993–making games was more a whirlwind of strong personalities, enthusiasm, and guesswork than an exact science. This  chaotic development process led to Diablo becoming one of the most influential and addictive video games ever made. 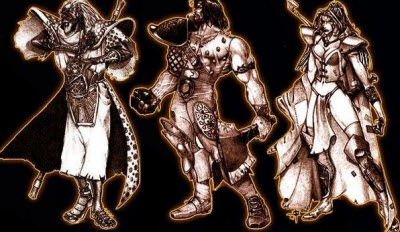 The Patchwork Road to Hell

After forming Condor in 1993, David Brevik and Max and Erich Schaefer didn’t immediately start on Diablo. To carve out an income channel, they signed on to develop Justice League Task Force, a one-on-one fighter for the Sega Genesis. The project quickly became more work than the three founders could handle on their own. To bolster their ranks, the guys didn’t send recruiters sniffing after veteran game designers. The term “game designer” barely existed in the early ’90s, a period when the games industry was still in its infancy. Instead, they looked for programmers and artists whose passion made up for what they lacked in practical experience.

“It was our theory early on that you’ve got to get the best out of the people you hire,” Max Schaefer explained to me. “It’s mentally and physically demanding to make a competitive, innovative, good game. You have to [create] an atmosphere where that can happen.”

A crucial component of Condor’s atmosphere was the team’s freedom to play to their individual strengths and interests. Their first hire was Michio Okamura, a comic book artist who worked as an executive at an import-export company. “I had no experience working on a computer except for doing import-export documentation for customs orders,” Michio said. “I had never [drawn] anything on the computer. So through the entire Justice League Task Force project, I didn’t do much on the computer. Almost everything I did was hand drawn.”

What Michio lacked in technical skills, he more than made up for in talent and drive. When development of Diablo finally kicked off, Erich Schaefer headed up the art team. Rather than arrange his artists in an assembly line and dictate specific monsters, Erich encouraged the team to let their imaginations run wild. “Michio would come up with reams and reams of drawings, so it was fun to get a bunch of drawings and just say, ‘Okay, this looks really cool, but this guy has a cooler sword, so let’s combine those drawings,'” Erich Schaefer told me. “I think that was some of the most fun collaborative art stuff we did at the time.”

Eric Sexton, an artist hired to push pixels around on the Game Boy version of NFL Quarterback Club, another of Condor’s console projects, seized the opportunity to become more intimately involved in Diablo’s design process. “Maybe five or six months toward the end, Erich Schaefer said, ‘Hey, we need quests. I’ll pay five dollars for every quest we put in the game,'” Eric Sexton reflected to me. Eric’s eagerness to help form the bedrock of Diablo’s dark world gave way to quests and monsters such as the Butcher and the Skeleton King, bosses who knocked around the game’s early levels and made mincemeat of adventurers still unproven in battle.

The creative freedom that influenced Diablo’s quests and bestiary extended beyond Condor’s walls. After a fortuitous meeting between Condor’s co-founders and Allen Adham, co-founder of Blizzard Entertainment, Allen agreed to publish Diablo. He loved the game’s gothic-horror setting and tone but expressed concerns over Diablo’s use of turn-based gameplay. Allen and his colleagues at Blizzard found Diablo’s “my turn, your turn” style of gameplay dull and archaic after the success of WarCraft, their real-time strategy game.

Allen’s insistence that Condor convert Diablo to a real-time game exploded into a passionate debate between the studios. After round after round of heated discussions, Brevik and the Schaefers decided to bring their team in on the dispute. 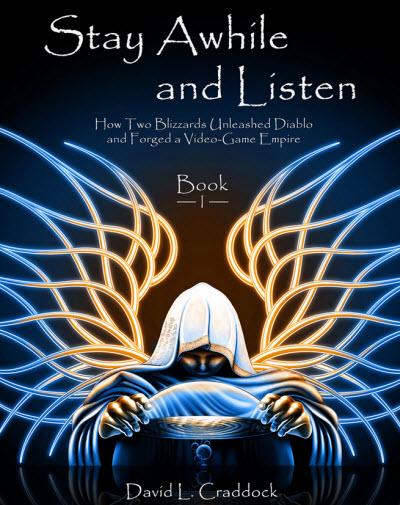 Above: Stay Awhile and Listen

“Our open minds were our greatest advantage at that very early phase,” said Matt Uelmen, Diablo’s composer. “The thing to remember is that real-time wasn’t even in the picture for the computer RPGs we grew up on, like the roguelikes. So even though we could all recognize real-time as an inevitability, to be told ‘the future is here’ was still a little shocking.”

Overnight, Brevik, the game’s lead programmer, converted Diablo to real-time. From the moment he clicked on a skeleton and watched his Warrior march over and shatter the bony foe to dust, the appeal of instantaneous feedback clicked. Turn-based was out. Real-time was in.

Other arguments in favor of or opposed to various features rose up during Diablo’s development, leaving the cutting room floor littered with grand ideas. Early on, Condor proposed selling expansion disks for five bucks apiece. Each expansion would include new weapons, spells, dungeon tiles, and a collectible trading card depicting a rare item included on the expansion disk.

Eventually, the two Blizzards decided that trading cards and a constant stream of expansions were less important than other issues–namely, the construction of the free Battle.net gaming service and Diablo’s adult-oriented content.

“We didn’t think our vision took things too far,” Erich Schaefer said. “I remember one issue Max had with somebody down at Blizzard South”–a tongue-in-cheek nickname used by Blizzard North developers to reinforce their equality to Blizzard Entertainment when Entertainment tried to throw its weight around–“was when a guy asked, ‘Is this a game you would be proud to show your grandmother?” And Max’s answer was yes. But our answer was also that we weren’t making this for somebody’s grandma. We were making it for us.”

“You specifically want to go out and hire passionate, brilliant people, and passionate, brilliant people are opinionated,” explained Jeff Strain, a programmer at Blizzard Entertainment who helped build Battle.net before migrating to the StarCraft development team. “When you put four, five, or six people in the room together, all highly opinionated, it’s highly unlikely that, for any given subject, they’ll all have the same opinion. In this particular case, the problem was that chain of command was not clear. The person who was responsible for making the ultimate call was not very clearly specified, and that’s always a dangerous situation.” 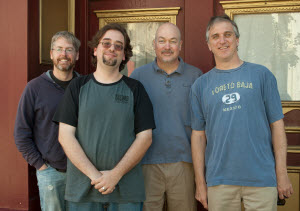 Above: David Craddock and Blizzard founders

More than impassioned arguments and creative freedom, the intimate size of the Diablo team meant that every developer’s personality left a footprint in the game’s DNA. Michio Okamura’s knowledge of Japanese culture and raw artistic talent populated Diablo’s dungeons with tough and frightening denizens such as the Butcher. Eric Sexton’s eagerness to flesh out the game’s mythology gave the Butcher a special place in Diablo and in the minds of every gamer who ventured down into the dark. Blizzard Entertainment’s more seasoned developers fought for the real-time, click-click-click gameplay that made Diablo such a joy to play, and were responsible for engineering Battle.net, which became the standard bearer for free gaming services. And still others such as Matt Uelmen, who composed Tristram’s iconic soundtrack that immediately springs to the mind of millions of gamers when they hear the word “Diablo,” left an indelible mark on the game.

Gamers and critics agreed. Over the course of its shelf life, Diablo went on to sell over 2.5 million copies and nabbed multiple Game of the Year awards following its release in late 1996. It also went on to become a giant ongoing franchise for Blizzard. The game’s sales figures and accolades exceeded Blizzard North’s wildest expectations, largely because they had not set out to make an award-winning product. They simply wanted to make a game they enjoyed playing—and, ideally, bring in enough money to keep the lights on.

“We had no project management or methods or agile development—all this fancy pants shit they have now,” David Brevik put it simply during one of the many times he and I reflected on the early days of Condor and Blizzard North. “Just guys on a shoestring budget and a prayer.”