Spoiler alert! Reading this column before you have watched every episode of Breaking Bad, up to and including “Ozymandias,” which aired Sunday night Sept. 15, could spoil the plot for you.

Breaking Bad is full of wisdom about many things. It has a lot to say about how screwed up cancer, health care, meth, and American business really are. And the genius of its writing and acting is that you still root for its protagonist, Walter White, all the way along his transformation from Mr. Chips into Scarface.

But let’s not overlook the fact that Breaking Bad also contains a lot of valuable advice for entrepreneurs. Sure, Walter White may be a terrible boss. But consider this: Steve Jobs was a terrible boss, and look how well Apple did under his leadership.

You want to really want to succeed as an entrepreneur? Consider these lessons from Heisenberg College.

1. Nothing is more important than money

In the universe of Breaking Bad, Obamacare hasn’t taken effect yet. (And it’s not clear it would have helped Walt anyway.) So Walt solves the problem through the only route that, fortuitously, opens up to him: cooking meth. It doesn’t matter that it’s illegal or that meth has been the cause of its own nationwide health epidemic. Walt doesn’t care. All that matters to him is making enough money to pay his bills and leave a small legacy for his family.

Eventually, Walt moves up to become a cook in Gus Fring’s underground superlab. Fring pays him $15 million a year, which Walt splits with Jesse, for his cooking skills. But even that’s not enough. Walt eventually eliminates Fring and goes into business on his own, amassing tens of millions of dollars — so much money he doesn’t know what to do with it.

The lesson: If you really want to succeed, you have to prioritize making money. Everything else is secondary.

2. Lie to your family to protect them

Because his business is dangerous, illegal, and immoral, Walt wants his family to have nothing to do with it. He nearly wrecks his marriage by constantly lying to his wife, Skyler, about what he’s up to. When he comes clean to her, he doesn’t come clean all the way — he continues to hide important information from her, such as the fact that he’s responsible for as many as 249 deaths.

Walt justifies his lies by continually repeating his belief that family is everything. But in the end, he is willing to threaten his wife if she gets in the way. See No. 1: Nothing is more important than money.

The lesson: Even family is secondary to the mission of making money. Don’t let your wife or children get in the way of your dreams of becoming successful in business.

3. If you’re good enough, you can get away with murder

Walt is such a brilliant meth cook that he is nearly untouchable. For a long time, Fring can’t kill him — even though Walt is clearly a loose cannon — because he doesn’t have a substitute whose skills come close to Walt’s. When Fring gets close to replacing Walt, Walt moves quickly to eliminate the competition, restoring his own untouchable status.

Later, when dealing with Declan — the drug lord from Arizona — and Todd’s white-supremacist uncle and his gang of killers, it is again Walt’s cooking skills that keep him alive. He’s a fast talker, to be sure. But what really makes him a force to reckon with is his talent in the lab.

The lesson: Find a skill that is so rare and so valuable that you can’t be fired, because to fire you would cause irreparable damage to your company.

4. If you are ruthless, you can build an empire

Don’t settle for being a gear in someone else’s drug machine. Never mind that Gus Fring built a fantastically well-run, profitable, secure drug operation completely under the noses of the DEA and Albuquerque’s respectable society. Never mind that Fring was paying Walt millions of dollars for a few months’ worth of work and seemed prepared to usher Walt into the inner circle. Walt had bigger ambitions, and he blew up Fring (literally) and burned down Fring’s operation (literally) so he could establish an operation on his own terms.

Why? “I’m in the empire business,” Walt told Jesse.

The lesson: You can be the boss, too. But you have to take out your current boss — and maybe your partners. Don’t worry: Do you think Steve Jobs hesitated about discarding Nolan Bushnell, Mike Markkula, or Steve Wozniak once they were no longer useful to him?

5. But you pretty much have to kill everyone to survive

Throughout Breaking Bad‘s six seasons, Walt’s actions are always justified — in some way or another. His first two murders happen simply out of self-preservation, because he’s trying to keep the small-time drug dealers from killing him and Jesse. Later, he allows Jesse’s girlfriend, Jane, to die because he knows she’s a bad influence on Jesse, and he needs Jesse to focus on his work. Walt kills two more drug dealers to protect Jesse, and he orders Jesse to put a bullet in Gale’s head to protect both of them. He puts a hit on all nine of Mike’s surviving men, plus his lawyer, in order to keep his secret from leaking out, and as of this week’s episode, he still has an open contract on Jesse’s life.

Just about the only unjustified killing that Walt is responsible for is his shooting of Mike, which he seems to have done simply because he let his rage get the better of him. But even that was probably a rational move in the end, because it wound up protecting Walt.

The lesson: You have to be willing to take out anyone who could threaten your success.

“I am the danger,” Walt tells his terrified wife. “I am the one who knocks.”

6. Nothing is ever enough 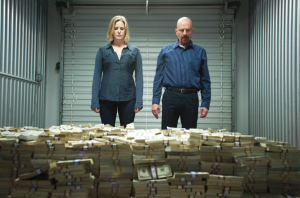 Above: That’s a whole lot of cash.

Walt eventually amasses so much money — in cash — that it creates a gigantic cubical stack big enough to lie down on. When he hides it in the desert, it fills up seven or eight 55-gallon drums. Although Skyler and he weren’t able to get an exact count, Walt says that it’s about $80 million in cash.

And that’s still not enough. In the end, he can’t buy what he most wants: Hank’s life.

7. If all else fails, pay someone to erase your identity and start over in New Hampshire

All you really need is a barrel full of Benjamins and a lawyer corrupt enough to hook you up with someone who can give you a new identity. Family, friends, former partners, business deals you had in place: Forget them all. Take your $10 million and move someplace nice and quiet. You can always sneak back later to exact your revenge — or come back in force, some day, when you’ve rebuilt your empire.

The lesson: If you tried, failed, and went back to your ordinary life, you’re not an entrepreneur.

If you tried, failed, and then took your barrel of money — no matter how small — and started all over again, leaving nothing but scorched earth behind you: Then you’re an entrepreneur.