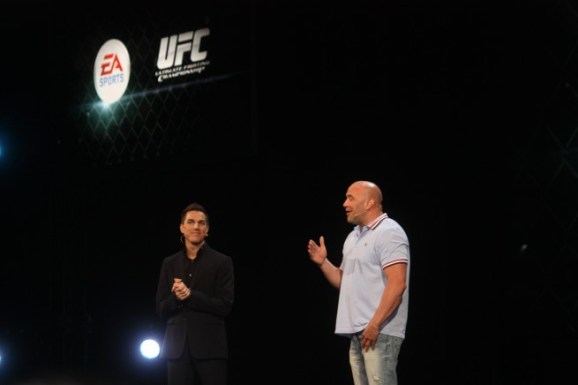 Electronic Arts’ interim boss Larry Probst can go back to focusing entirely on gold medals as the chairman of the U.S. Olympic Committee because EA finally has a new, permanent chief executive officer.

The revealed today that it appointed one of its younger executives, Andrew Wilson, to the CEO post.

The publisher made the announcement on its website with a message from Wilson.

“Let me start by saying I am deeply honored and humbled to become EA’s CEO,” he wrote on the company’s blog. “I have a profound respect and passion for this organization as well as for our global community of fans, and I’m incredibly motivated to serve our people, our gamers, and our shareholders at such an exciting time in our industry.”

Going forward, the new CEO says he will focus on “delivering amazing games” across platforms, “instilling a culture of execution” that creates profit, and the continuing transformation of EA into a more digital company.

Wilson fills a vacancy created when former EA chief John Riccitiello stepped down from that role in March. In the interim, another former EA chief, Larry Probst, stepped in as executive chairman.

Probst was already the acting chairman of EA’s board of directors. He simultaneously served as the chairman of the U.S. Olympic Committee.

“On behalf of EA’s board of directors, I am very pleased to announce that we have chosen Andrew Wilson to serve as the next chief executive officer of Electronic Arts,” Probst wrote in a blog on EA’s website. “The rigorous search conducted by our board included several talented executives from both outside the company and from within EA. Andrew’s appointment is a clear demonstration of the deep bench of management talent at EA, and reflects our fundamental belief that EA is on track to become the global leader in interactive games and services.”

Wilson previously served as executive vice president of EA Sports, where he oversaw a strong lineup of franchises, including Madden NFL, NCAA Football, and NHL.

In the time since Riccitiello stepped down, Probst and EA’s board has enacted a series of job cuts and other cost-cutting measures designed to improve the performance of the company.

The company laid off nearly 10 percent of its staff in the quarter following Riccitiello’s departure. It continued with additional sporadic cuts in April, June, and July designed to align “all elements of its organizational structure behind priorities in new technologies and mobile,” according to an EA spokesperson.

These cuts leaves Wilson with a slimmer game company.

We’ve reached out to EA to determine if it is planning any more job cuts.

Industry luminary Trip Hawkins founded EA in 1982. Over time, the company grew into the top third-party game publisher with huge franchises that include the aforementioned sports games along with titles like Mass Effect, Battlefield, and Need For Speed.

John Riccitiello took over the CEO role in June 2007 from Larry Probst. In 2008, due largely to the global financial crisis, EA suffered from poor holiday sales. That caused EA’s share price to drop from around $48 down to $27 by the start of 2009.

The stock never recovered under Riccitiello.

In December 2011, after an extended development, EA and developer BioWare released the anticipated Star Wars: The Old Republic. The massively multiplayer online role-playing game started out as a subscription-based title. The game is seen now as Riccititiello’s biggest effort to jump-start the corporation’s profits.

That plan failed. A plummeting subscriber base forced BioWare to shift The Old Republic to a free-to-play model.

Today, prior to EA’s announcement, the company’s stock hit $28.13, which is its highest price since the start of 2009. Following the Wilson appointment, the stock is trading at around $27.50 on the after-hours market.