Former Vegas card-counter Jeff Ma should know — he was part of the MIT blackjack team that earned millions playing casinos and was immortalized in the book Bringing Down the House and the movie 21. That took a tightly-knit, high-functioning, well-trained team, and that’s exactly what his current startup, TenXer, is trying to help others achieve.

“Metrics and data are valuable, but they’re more valuable with context and place,” Ma told me yesterday.

TenXer, which launched last year, intended to use metrics and data to help developers be better engineers — to use the power of effortless quantification and big data applied in very small ways to show programmers how they can achieve outsized results … ten times as much as they previously could.

Now the company is pivoting from an individual, consumer focus to an enterprise, team focus. 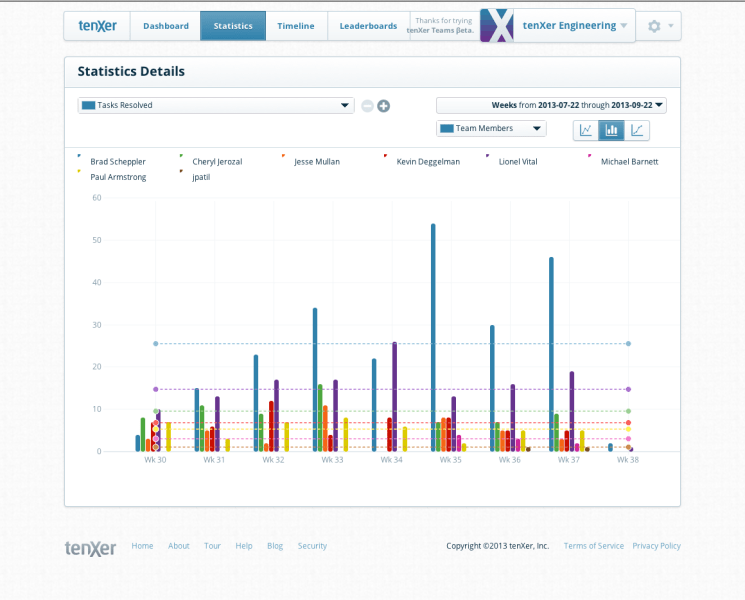 But it still has consumer roots, and that will never change, Ma says.

“We want to build a tool that’s bottoms-up … that the end user wants whether their organization wants it or not,” he said. “But the tool is not a consumer tool — it is an enterprise tool, a business tool, and it’s more meaningful in the context of a company.”

The goal is still to make developers better by essentially gamifying their jobs, effortlessly. TenXer integrates with tools like GitHub, Jira, BitBucket, Pivotal, Jenkins, and Phabricator to track what engineers are doing without any extra work, and then provides metrics that help any developer easily analyze and understand their daily work habits — and then improve them.

But developers almost always work in teams, and, Ma says, want to know how they are doing in the context of the team, not just individually. In addition, most software managers really have no idea how to give feedback, or even what to base it on. TenXer will help with both, Ma says.

“It’s like the NBA coach talking to his players,” Ma told me. “He asks them what their goals are, and they say to win a championship. He asks how, and they answer that they want to average 20 points and get 10 assists a game. He asks how again, and they break it down to how many three-pointers, how many pick-and-rolls, and so on.”

In other words, the goal is the steps, broken down.

And the new TenXer isn’t just about one point guard or power forward, it’s about how the team is progressing: how individual objectives and progress are building towards an entire company’s goals.

Rich Miner, the general partner at Google Ventures who invested in TenXer, agrees.

“I’m a big believer that when you measure things you can improve them,” he told me last night. “I love the vision and certainly have seen it start to show measurable results.”

I asked Miner whether Google would soon be using TenXer.

“There have been discussions,” he laughed. “We’ll probably see it in some of our portfolio companies before we see it in Google.”