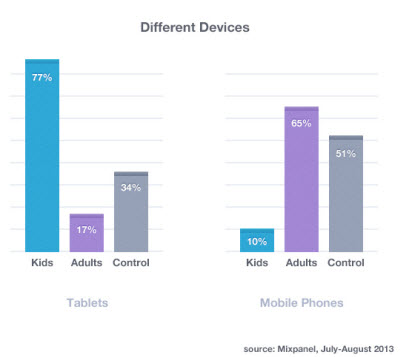 This may not be a shocker, but kids overwhelmingly favor the big touchscreens of tablets over smartphones when it comes to playing games, according to mobile analytics firm Mixpanel.

The data from 15 billion mobile transactions a month shows that 77 percent of kids favor gaming on tablets compared to about 10 percent who favor smartphones. By comparison, 17 percent of adults play on tablets while 65 percent play on smartphones.

Suhail Doshi, the chief executive of Mixpanel, said in an interview with GamesBeat that the data makes sense on an intuitive level, as kids like the larger screens while adults often play while on the run during the work day, when their primary device is a mobile phone. Younger kids often don’t have their own smartphones as well.

“Kids are getting very used to using these devices,” Doshi said.

As those kids in the tablet generation grow up, developers can expect more and more of their audience to shift toward tablets.

For adults, the analogy is getting a quarter from your parents to play a game at an arcade. Today, kids have regular access to connected devices at a very young age. Kids are especially found of the iPad, while Android tablets aren’t nearly as plentiful among the groups studied, Mixpanel found. 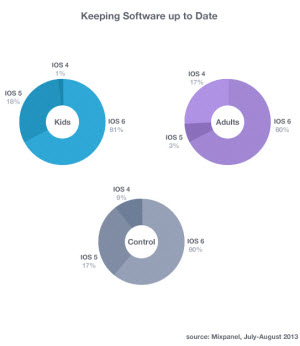 The study looked at a series of games designed for kids under the age of 10 as played on iOS devices. It also looked at games with a primary audience of adults, and it looked at a control group of multiple age groups.

“People are keeping their devices up to date, even if they might be hand-me-down devices,” Doshi said.

Many developers may assume that they have to make their games work across all OS versions in order to reach the largest audience. But if the developers are targeting kids, they don’t have to worry about targeting older versions so much, and that will free the developers to create games that take advantage of new OS features.

Another interesting fact is that games for kids have remarkably low retention rates. On average, only 12 percent of kids return to a game app after one month. By comparison, more than 41 percent of adults will return to a mobile game after one month. That means that developers should spend more time making their apps more engaging, rather than marketing the app to more and more kids.

“While marketing is important, spending more time on in-app engagement is a better use of your resources,” Leverich said. 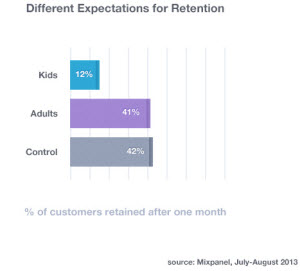 Above: Mixpanel’s stats on retention rates.

The data analyzes actions taken in games during July and August. More than 1,420 companies use Mixpanel to analyze actions in products used by 225 million customers.