MirrorMoon EP makes you feel like a pioneer. Released Sept. 4, this PC game offers a dazzling and often bewildering dive through unknown galaxies filled with strange iconography and architecture, puzzles, and mysteries. It provides thousands of planets to discover and name, yet gives absolutely nothing away.

In space, no one will hold your hand.

Dropped on a strange, yet beautiful, red planet and armed only with a tool of unknown function, you have only two ways to make progress: exploration and experimentation. Against an ambient, haunting soundtrack, you slowly discover some of the secrets of the world and its moon before entering a spacecraft as mysterious as the red planet itself, which offers the chance to seek out worlds as yet unseen.

Created by Santa Ragione, an independent game studio based in Milan, Italy, MirrorMoon EP is available to buy on Steam or directly from the Santa Ragione website, It is the evolution of an idea first born in just 48 hours for the Global Game Jam event in 2012. This new “Extended Play” version of the original MirrorMoon concept combines puzzles and exploration in a lonely, but frequently jaw-dropping, tribute to space. 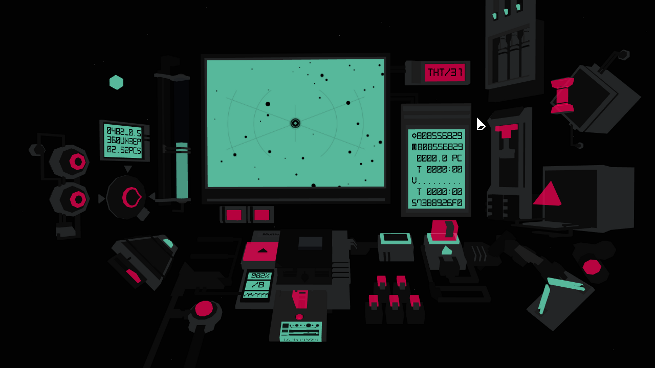 Above: Inside the cockpit of MirrorMoon EP’s spacecraft. It’s a puzzle disguised as transportation.

MirrorMoon EP’s initial mood of discovery reflects in the seemingly indecipherable layout of your spaceship’s cockpit. No guidance is given, no instrument named, and curiosity is the only way to proceed.

Allowing players this opportunity to discover is intrinsic to the game, according to Santa Ragione codirector Pietro Righi Riva. “We could say that the whole idea behind MirrorMoon EP is exploration,” he told GamesBeat. “You, as the player, will explore planets surfaces and explore how to use the various paraphernalia to decipher the space around you. In the same way, we wanted to have a fascinating and complicated interface to discover without a tutorial.”

“The mystery and the joy of discovery come from exploring the unknown, guessing functions and objectives without certainty,” said Righi Riva. “This is also the key to MirrorMoon EP fiction. A confined, yet open enough, universe of things that each player can make personal. We designed it so that every element in the game leaves room for interpretation, from the function of an abstract piece of equipment in your ship, all the way down to the artifacts and the stars’ names.”

Were the members of the team ever tempted to label the cockpit? “Yes, we were. Constantly! The whole game’s design is a balance of mystery and frustration. What we went for was to capture an instant, that time-frame that makes the discovery as rewarding as possible before frustration kicks in and players leave the game.”

MirrorMoon EP has released on Valve’s Steam network (with an Ouya microconsole release to follow), and Santa Ragione is keeping track of the community response.

“Having access to the Steam community has been great so far, if a little addictive,” said Righi Riva. “It’s our first game on Steam, so we never really got the opportunity to be this close to players [before]. Initially we were pretty scared that players would have found the navigation and puzzles too hard to complete, but the overall response has been amazing.

“We’ve had plenty of players sharing thoughts, theories and strategies with each other. Some are trying to interpret clues to find the ‘anomaly’ [something alluded to in the game’s first section]. Others are sharing pics of hidden artifacts. We also had people trying to reverse-engineer, with a good level of accuracy, the coordinates system of the galaxy, and that was pretty impressive.”

When new players join this community, the game points them to the latest season, which contains a galaxy of a thousand new stars, at least half of which can still be discovered. MirrorMoon EP’s galaxies are procedurally generated, meaning each season offers a nearly unique player experience. 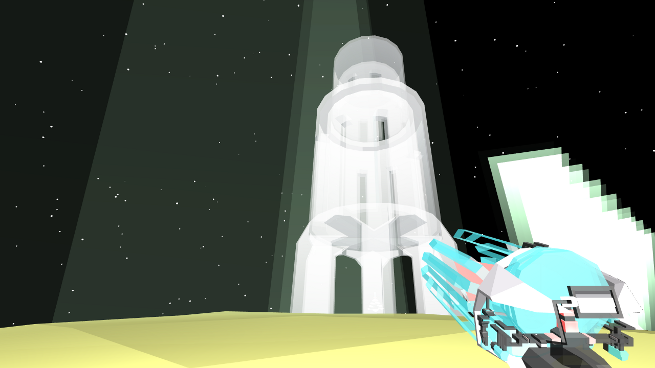 Above: The “Portal”-style gun allows you to interact with the world in a number of ways.

“MirrorMoon EP is procedurally generated, but it’s not fully random,” said Righi Riva. “We put a lot of design effort in making this possible without having to explore every single planet ourselves.”

The puzzles are partly authored, using a system created “to generate every possible puzzle combination backwards, based on the discoverability of each element in the puzzle,” explained Righi Riva. “We tested key scenarios and decided what to keep and the percentages of distribution within a galaxy. Artifact generation also works in a similar way, with specific attention given to balancing rarity — to provide discoveries that feel really unique and personal to the player.”

“Color patterns are not random,” though, Righi Riva said, “and they appear in a specific way that players can use to interpret the geography of the galaxy. Star system positions are also generated based on a seed that we carefully pick season after season, to make sure it provides an interesting experience.” 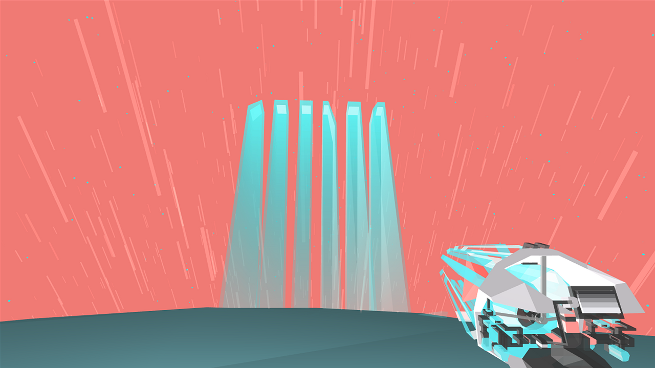 Above: MirrorMoon EP is a visual and audio treat, with each planet offering new sights and sounds to behold.

The journey or the destination?

MirrorMoon EP offers scant clues about its ultimate goal. For some, though, the journey itself will be sufficient. “Some players seem to be finding inspiration in the exploration and discovery of mysterious worlds, without needing an end point,” said Righi Riva.

“It indeed could be argued that the ‘ending,’ while there, is not the point of MirrorMoon EP. The experience of trying to reach this point is what matters. And, even if you don’t want to go for that objective, we hope to have left enough room for the player to find their own journeys and motivations within the game.”

For those in search of answers, however, Righi Riva offered some carefully worded advice: “Without spoiling too much, it could be said that the game’s puzzles and mysteries operate at three different levels. There is the single-player, single-planet experience, and the multiplanet puzzles, where you gather hints with other players across multiple planets, trying to solve a main, giant navigational puzzle. Finally, there are some interseason mysteries.”

Righi Riva acknowledged the discovery by the Steam community of a circled star, seen reappearing in the sky from various planets. “The circled star is a clue to the main puzzle of the game,” he said.

Beyond that clue, all Righi Riva will divulge is that, “color patterns, relative position and constellations can help players reach specific positions in the galaxy, and these three elements are bound to specific artifacts in the game. Players on Steam are approaching this problem from a serious astronomical perspective, which is awesome and we are sure it will lead them the right way.” 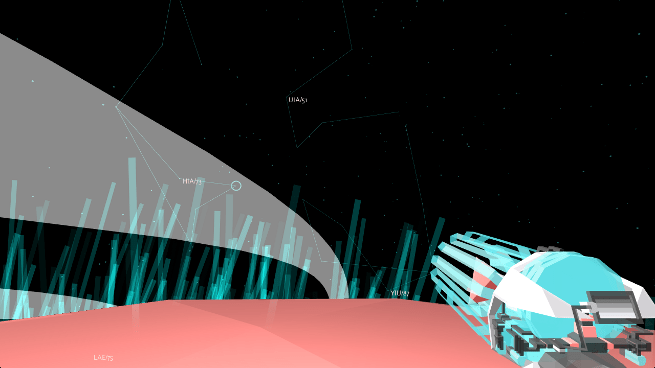 The ambient, mysterious, and isolated portrayal of space in MirrorMoon EP has echoes of many classic science fiction moments. It is unsurprising, then, when Righi Riva cites some of the influences behind the game. The list includes Solaris author Stanislav Lem, French artist Jean Giraud (Moebius), and the boot-up sequence of the starfreighter Nostromo from Alien. He also points to the classic space simulation game Noctis IV.

“It’s hard to say what exactly inspired us to make MirrorMoon EP the way we made it,” said Righi Riva, “because it’s not just the result of research for a single project but because astronomy, space and sci-fi are lifelong passions. This is the reason why MirrorMoon EP is both a sci-fi story and a celebration of sci-fi as a genre.”

“I think naked eye stargazing, observatories, and looking at star maps were the source of the feelings we tried to encapsulate in the navigation sequences,” said Righi Riva. “It’s a weird mix of silences, awaitings, day-dreaming, and fear of the void.”