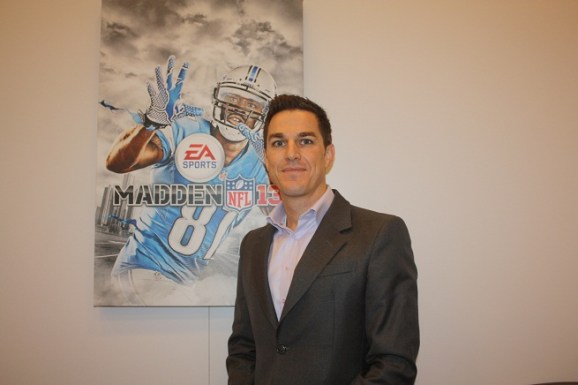 Electronic Arts’ choice of its new chief executive, Andrew Wilson, is generating a lot of thoughts about what it means for the future of the video game giant.

For EA, it likely means it will stay the course on its strategy of straddling mobile games and next-generation console games. But Wilson’s choice also shows that EA’s board is willing to take a risk on someone who might introduce fresher thinking and who isn’t entrenched in just one kind of strategy.

Wilson replaces ex-CEO John Riccitiello, who left EA in March. Wilson has less experience than other executives at EA in the game business, but he has worked at the publisher for almost 13 years. Wilson started in EA Australia and served in a variety of positions. He started leading EA Sports in August 2011.

Now he will run a much larger organization that’s amid a number of transitions as revenue from shifts from physical goods to digital goods. New consoles are coming, and gamers are embracing new business models such as free-to-play. EA has been nimble at adapting to these models, but it has had a hard time churning out big profits, and competitors have multiplied on the global stage for gaming.

Consequently, the company’s stock price has been shaky over the years. Wilson says he will stay the course on EA’s strategy. In after-hours trading, EA’s stock price is down a half percent to $27.46 a share. EA’s total value is $8.5 billion.

Larry Probst, executive chairman of EA and its former longtime CEO, said that Wilson’s appointment is a “clear demonstration of the deep bench of management talent at EA.” It is a compliment that EA could reach into its lower rank and come up with a satisfactory CEO candidate. But not everyone on that bench may not be happy with the choice.

Peter Moore, chief operating officer, clearly outranked Wilson, and Frank Gibeau, president of EA Labels, has worked at the company considerably longer. Both were in the running to be the CEO based on observations from both insiders and outsiders. They will probably stay for a while, but it wouldn’t be surprising if they left after being passed over.

“On one hand, this is a safe choice for EA, as Andrew is well known and generally well respected at the company, and he’s not likely to make any drastic changes anytime soon,” said Colin Sebastian, analyst at R. W Baird. “He also has leadership experience running EA Sports and the company’s digital distribution platform Origin. And he also produced the very successful FIFA game, so he has credibility with the studios and development teams.

“The other hand, and the biggest unknown, is his lack of CEO experience, so it’s a good thing that Larry Probst will hang around to help with the transition.”

Other experienced candidates might have included a variety of former EA executives: Mitch Lasky, now a venture capitalist at Benchmark Capital; John Schappert, who started his own game startup recently; Owen Mahoney, chief financial officer at Nexon; and Don Mattrick, who took himself out of the running by taking a job as CEO of Zynga.

We don’t know the reasons for the choice, but many people have their own reactions to what could be happening inside EA and its board. Wilson doesn’t have a long track record that’s easy to read. He was in charge of FIFA, the soccer franchise that has done very well in generating engaged players on the digital front. But he has not worked on any pioneering new intellectual properties.

One colleague said it was an “inspired choice by the board.” An industry insider wondered if it meant that EA was putting more importance on branding, as is so important with EA Sports, over game quality.

Still another industry veteran wondered how committed Wilson will be to digital gaming, which represents EA’s future but requires a lot of investment now.