Blue Jeans Network, the new face of business-class videoconferencing, has raised a massive $50 million fourth round of financing, the company announced this morning, bringing its total financing to a cool $100 million. The company will use the money, CEO Krish Ramakrishnan told me yesterday, to “set the world on fire.”

And to continue pounding industry incumbents like Cisco, Polycom, and Microsoft, of course.

“We’ve grown from zero minutes and zero percent marketshare to 100 million minutes, annualized,” Ramakrishnan said. “Which means we’ve grown anywhere from a third to half of the videoconferencing market in just 2 years.” 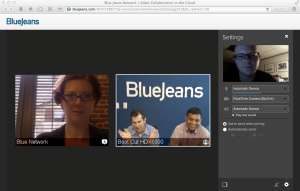 That’s impressive growth, fueled by the company signing over 2,000 enterprises such as Facebook and Stanford University to videoconferencing service deals, with over three million users in virtually all verticals. And it comes at the expense of old-school videoconferencing competitors who have lost approximately $250 million in business in the past 12 months.

“Cisco is looking for leaders — a lot of them have left,” Ramakrishnan says. “Polycom is looking for a CEO. Microsoft is in a re-org … all these industry titans are focused on themselves.”

Blue Jeans will use the $50 million for aggressive international expansion in an all-out attempt to be the #1 player in the market by expanding marketing and sales to capture market share and grow awareness, he said. The company just launched in Australia, and will be announcing service in Europe “in a big way,” Ramakrishnan said, which will include hiring a leader for the company there. In addition, Blue Jeans, which is based in Mountain View, California, is establishing a major sales office in San Francisco.

But there’s product improvement in the pipeline too.

“You cannot rest on your laurels, you need to continue to innovate,” Ramakrishnan told me in a Blue Jeans videoconference. “We want to build a platform for one billion annual minutes, so we need to scale. We have become mission critical, and we need to be reliable.”

The $50 million round was led by Battery Ventures, which put $26 million in, while existing investors Accel Partners, New Enterprise Associates and Norwest Venture Partners also participated. Blue Jeans said the VCs did a full competitive industry analysis before making the investment, and Blue Jeans came out on top.

Battle lines are clearly being drawn in the new videoconferencing market, which doesn’t rely on expensive hardware, physical installations, and proprietary networks. Just yesterday, FuzeBox announced $26 million in a third round of funding, for a total war chest of $42 million. That investment was led by Hermes Growth Partners and Index Ventures, with participation from Khosla Ventures, Insight Venture Partners, TriplePoint Ventures, and others.

And perhaps Blue Jeans’ biggest new-school competitor is Vidyo, which raised $17 million in April to bring its total investment to a staggering $116 million — and which has a very flashy partnership with no less a company than Google, providing the core technology for Google+ Hangouts. At the time, Vidyo CEO Ofer Shapiro told me that his company was growing fast at the expense of others:

“Our overall growth in billings was 68%,” Shapiro said. “That’s while our competitors were somewhere between flat and negative growth.”

The real battle between the giants and upstarts of the videoconferencing world, however, is not over the growing but still small 200-million-minute-pie of global annual videoconferencing. Rather, the battle is over who will be the company or companies that will take the massive 100 billion minute audio conferencing market into the glorious future of rich real-time video-based collaboration.

Which future Ramakrishnan is keen to own — and reinvent — by adding in features such as file sharing and video sharing, live and simple, within a videoconference.

“Blue Jeans is always going to be about real-time collaboration, making the face to face meeting as good as possible,” he said. “We’re also designing the world’s leading collaboration platform, and will be adding in features that you’d find in other types of collaboration tools to provide a richer, fuller experience.”