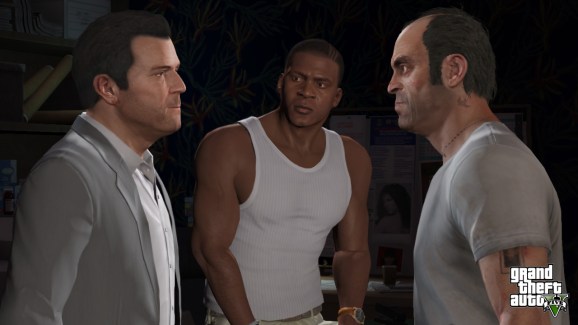 Grand Theft Auto V's main characters, Michael, Franklin, and Trevor may not look so good on the digital version for the PlayStation 3.

Grand Theft Auto V sales added up to more than $800 million during its first 24 hours, making it the best-selling video game of all time for first-day sales. [And more than $1 billion after three days.]

Take-Two Interactive Software, parent of game developer Rockstar Games, said today that the title achieved first-day sell-through sales that beat those of any previous Grand Theft Auto game and any other title the company has sold.

Launched on Sept. 17 for the PlayStation 3 and Xbox 360, the title is an open-world game with a narrative that focuses on three urban criminals. It was developed over five years with a budget estimated at $260 million.

GTA V is launching soon in Japan and Brazil.

“All of us at Take-Two are thrilled with the initial response to Grand Theft Auto V. Once again, the team at Rockstar Games have outdone themselves, setting the entertainment industry’s new standard for creativity, innovation and excellence,” said Strauss Zelnick, chairman and CEO of Take-Two. “Beginning at midnight on Monday, consumers around the world gathered in anticipation to be among the first to experience the evolution of this remarkable series. In North America alone, more than 8,300 stores opened their doors at midnight to welcome fans whose loyalty and enthusiasm were rewarded with what the New York Times called ‘the most immersive spectacle in interactive entertainment.’ We are incredibly proud of Rockstar Games’ creative achievement and could not be more pleased with the success of this launch.”

The game is both a critical and a commercial success. It has a 98/100 rating on review aggregator Metacritic for the Xbox 360, based on reviews from 38 critics. Our own Giancarlo Valdes gave it a stingy 95 out of 100, making it our highest-rated game in a long while. It’s rated Mature by the Entertainment Software Ratings Board.