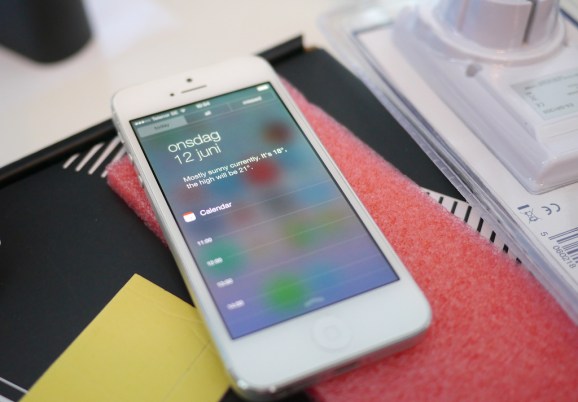 Apple’s iOS 7 came out Wednesday, and with it a bunch of app updates to take advantage of the flat, new interface.

The mobile operating system, which Apple last week announced at its Worldwide Developers Conference, turns away from the design concept that things on computers should look like their real-world counterparts. Instead, it opts for a colorful, flat, and pretty good-looking interface that provides a bunch of new features that developers have been playing with in a test environment for the last few months. Now it’s time to release the goods.

Let’s take a look at some of the biggest apps to make the iOS upgrade. 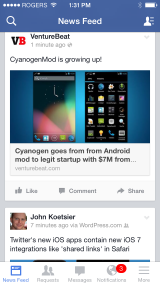 The new Facebook app kills the infinite scroll of the previous app, in a sense, by adding a row of never-moving icons to the bottom of every screen, to make the app “easier to get around,” Facebook said. Those menu items include News Feed, Requests, Messages, Notifications, and the ever-popular “More.”

One of the effects of the update would appear to be quicker access to friend requests, messages, and notifications — they’re now closer to your thumb — while embedding them within a menu structure at the bottom that gets you pretty much anywhere you want to go within Facebook. It also cleans up the top bar. Speaking of the top bar, one of the new iOS 7 updates is a translucent effect at the top that changes state based on where you are in the app. Read the full story on VentureBeat. 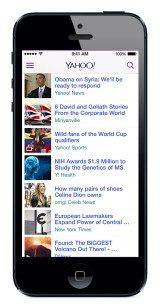 Yahoo says it tried to make its iOS 7 app “cleaner” — particularly in the news stream to make it more scannable. The company further included a big photo that is sometimes animated to accompany its articles.

It seems the majority of the app’s upgrade is focused around the news portion. With this iOS 7 app, Yahoo introduced a new “my saves” feature, from which you can bookmark favorite stories and revist them. Furthermore, it introduced breaking news notifications. Each piece of breaking news has its own page, which presents a timeline of events for those just “tuning in.”

Notetaking app Evernote also tried to make everything cleaner and more easily accessible. Now, people can access all aspects of their Evernote app from one screen. If you click on your notes section, Evernote will immediately show you two of your latest notes in case you want to quickly hop in one of those. Otherwise, you can create a new note, take a picture, make a task list, and more.

“For iOS 7, we started paring away everything that felt unnecessary,” the company said in a blog post. And it is, in fact, “clean and green.” Evernote’s Skitch annontation features also got an iOS 7 redesign as well to make it easier to add those bright pink arrows to your images and PDFs.

Flipboard went for “contemporary” with its iOS 7 redesign by tackling some of the Flipboard guts. It uses iOS 7’s features such as background-content loading — where information is constantly registering in the background so it’s immediately ready for you — in order to speed up the app.

It also went for the cool factor by using iOS 7’s “parallax” — that’s the technology that shows you more of an image when you tilt your phone up and down and side to side. Flipboard uses this feature for those viewing magazine covers in full-view. Tilt your phone and you’ll see more of the cover. 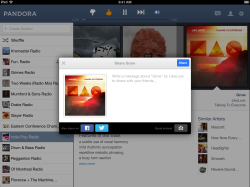 Pandora has added a lot of new features that should enhance the service on iPad overall. For instance, hitting the button to help diversify a custom radio station now gives you a list of suggested artists. The company really attempts to make it easier to share, rename, and further customize your stations from within the app. It also shows information about the artist that’s currently playing, too.

Another big addition is a new profile feed that shows a listener’s activity while on Pandora: things like music preferences, custom radio stations created, bookmarked tracks, and more. You can, however, set your feed to private (meaning the entire world will never know your obsession with Miley Cyrus). Pandora’s app also added some other notable social features, like the ability to make a note for individual songs that you can share on Facebook, Twitter, and other social networks. Read the full story on VentureBeat. 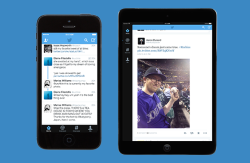 Twitter’s app contains some pretty interesting integrations with Apple’s new mobile operating system. In particular, a new Shared Links section in Safari displays links that people you follow have recently tweeted. This means that you can actually see popular and trending links from those you care about without even opening the Twitter app.

In addition, Apple included the Twitter #music station in iOS 7′s music app — which of course is only available for Americans at the moment, until Apple clears the digital rights in other territories. And, of course, Siri can search Twitter to help you find current information on people or topics you care about. Read the full story on VentureBeat.