Nintendo may have cheated, but its struggling Wii U system has its first great game. Of course, that game originally came out back in 2003 for the GameCube. I’m talking about The Legend of Zelda: The Wind Waker, a fan-favorite installment in Nintendo’s famous series of swordplay and fantasy.

Now, The Wind Waker gets the HD treatment, but the Wii U version (out in the Wii U eShop on Sep. 20 and in stores Oct. 4) also gets a few new convenient features and enhancements. This classic now looks and plays better than ever.

A masterpiece revisited
Bring up The Wind Waker, and most people will first think of its gorgeous, cel-shaded art style. Even before the HD upgrade, The Wind Waker was an incredibly handsome adventure. Everything popped off the screen in vibrant, kinetic colors and motion, be it the waves of the ocean or the dust you kick up when rolling around. Link himself had never looked better, with his face constantly displaying a wide range of emotions, from wonder when finding a treasure chest to his intense, burrowed brows when he’s sneaking across a ledge.

And with the HD upgrade, everything looks even better than before. Surfaces are smoother, textures are more clear, and better lighting adds another dimension to every scene. Almost any single frame of The Wind Waker HD looks like a piece of art. It’s not just that everything is cel-shaded, but it’s the way that technique perfectly fits the design and tone of the game. 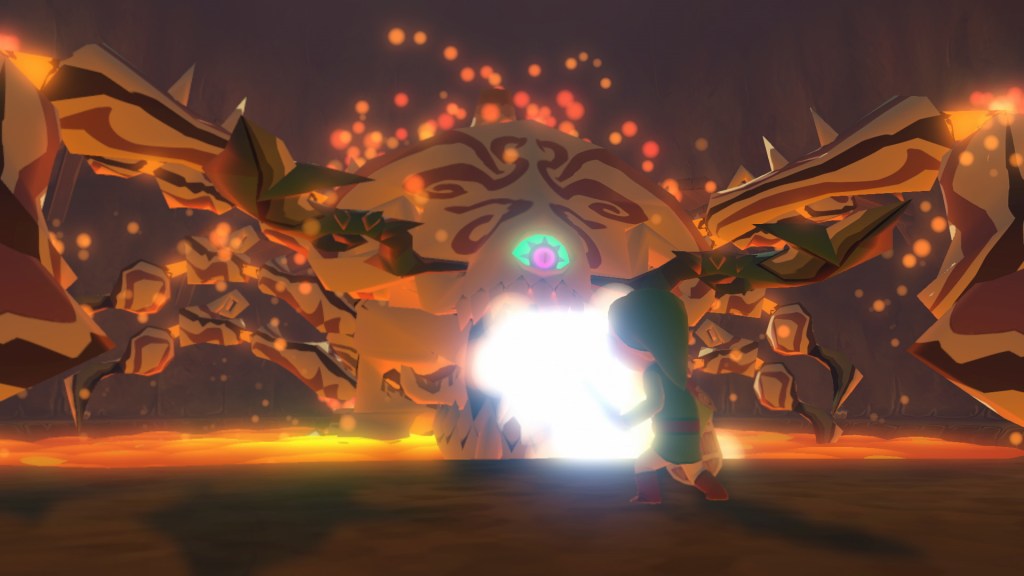 Above: Unusually epic for a first boss fight.

So, yes, The Wind Waker HD is gorgeous, but the experience itself has also held up remarkably well. It plays similarly to other 3D Zelda games, focusing largely on puzzle-solving and sword-based combat. Link’s epic adventure to stop the evil Ganondorf is still incredibly captivating, full of expertly designed dungeons and puzzles. The sea also offers dozens of islands and secrets to explore, all with rewards like treasure maps or pieces of heart (which can increase your maximum health). Even when compared to newer entries in the series, like 2011’s Skyward Sword for the Nintendo Wii, The Wind Waker still stands out as a ideally paced and engaging adventure.

New conveniences
Aside from the visual enhancements, Nintendo also added a few new features. The Wii U version takes advantage of the system’s tablet controller for dual-screen play, so you can have your inventory or map open on the tablet while keeping the action on the television. You can also use the touchscreen to quickly swap around your inventory, and you can use the gyroscope controls of the tablet for motion-based aiming for items like the grappling hook and bow. You can also play with just the tablet controller, which turns The Wind Waker into a quasi-portable game (as long as you don’t stray too far away from your Wii U).

Still, most fans will like the new swift sail the best. Available from the auction house on Windfall Island, the swift sail enables you to travel faster across the sea while also making sure the wind is constantly at your back (you normally have to change the wind’s direction manually). Now, a lot of people have complained that the sailing in The Wind Waker was boring and tedious. I was never one of them. I always found the vastness of its sea calming and humbling, and I though the great distances between islands added to the epic scope of the world. Still, I have to admit that it’s incredibly nice to move across the ocean with a little extra zip, especially when hunting for the eight pieces of the Triforce toward the end. The Triforce hunt, by the way, has also seen some streamlining, requiring significantly less backtracking to Tingle’s Island. 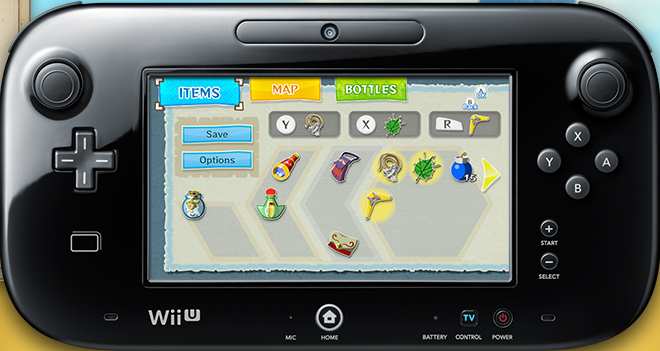 Above: Here’s what the inventory interface looks like on the Wii U’s tablet controller.

Besides all that, you’ll find a few smaller touches that just make things a little more convenient, like your wallet capacity starting out at 500 rupees instead of 200 and a larger amount of space for pictures in your Picto Box (The Wind Waker’s version of a camera). All together, these changes help fix some of original version’s few flaws and make for a less frustrating experience.

MIDI music
While the visuals have received a noticeable upgrade, the music sounds very much like it did back in 2003. Instead of a symphonic score, digital instruments make up every song. The compositions themselves are great, but the MIDI quality sounds cheap. It just often doesn’t match up with the epic action taking place on the screen, especially during boss fights.

Now, some of the music still sounds good (the digital string instruments sound much better than the fake horns, for whatever reason), but I really wish that Nintendo took the time to add a remastered version of the soundtrack for this HD version, similar to what Square Enix just did for its recent Kingdom Hearts 1.5 collection. Maybe I’m just spoiled from Skyward Sword’s excellent, orchestrated soundtrack, but I think Nintendo missed an opportunity here.

Still some technical hiccups
Despite the HD coat of paint, The Wind Waker still has a couple technical blemishes. The framerate, while mostly consistent, can take a noticeable dive during some busy action sequences. And while you can see faraway islands a long way off in the distance, their features awkwardly and suddenly pop into existence once you get near them.

The Wind Waker was a great game. In 2013, it still is. Its charming world, excellent design, and beautiful art have helped make it an ageless adventure that stands as the pinnacle of its franchise. This HD version not only makes everything look sharper than before, but the new additions and features make for an even more enjoyable experience without tarnishing the spirit of the original. Simply put, The Wind Waker HD makes one of Nintendo’s greatest games even better.

The Legend of Zelda: The Wind Waker HD comes out digitally for the Nintendo Wii U on Sept 20. A retail version follows on Oct. 4.  The publisher provided GamesBeat with a digital copy for this review.