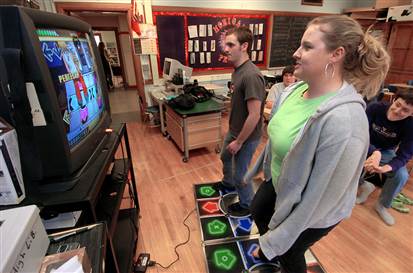 Nielsen offers an annual webinar titled “U.S. Gaming: A 360-degree view.” Summations of some of those webinars are available on the Nielsen website as PowerPoint decks.

“One of the reasons that we started doing this report four years ago was we realized that there was a little bit of a gap in the type of basic information about the gaming audience, and that the market for console gaming, really all gaming, changes so rapidly over time, compared to a lot of other industries,” said Nicole Pike, the director of Nielsen Games. Nielsen’s data is about the video game market strictly in the United States, but considering the size and influence of the American market, I believe the data is relevant to a larger understanding of the core audience as a whole.

Nielsen refers to gamers on the Xbox 360 and PlayStation 3 as the “HD console audience.” They are an average age of 28 and are 69 percent male, according to Nielsen’s data. If women represent 31 percent of the core audience, this is certainly worthy of consideration by developers and publishers, but this can also be a misleading statistic when we look at genre preferences.

The ESA’s aforementioned 2013 report breaks down best-selling “supergenres” by copies sold in 2012. The data is sourced to NPD Group’s Retail Tracking Service, which means the numbers only represent physical sales, which were still responsible for 60 percent of all video game sales in 2012 according to NPD data. A preview of the NPD’s “Core Gaming 2013” report also indicates that core gamers vastly prefer physical game sales over digital sales.

I asked David Riley at the NPD Group if he could break down supergenre sales specifically for the Xbox 360 and PlayStation 3. Here’s the breakdown, with the overall sales numbers for all dedicated platforms (which excludes PC, smartphone, or tablet games) for comparison:

The three biggest genres in retail HD console sales are shooters, action, and sports games. That the audiences for these genres were overwhelmingly male came as no surprise to me, but the gender imbalances were worse than I would have guessed:

All of this data represents core gamers. Hardcore gamers are referred to as “heavy use” gamers according to Nielsen’s data. They are defined as the top 10 percent of the core audience in total hours played per week. Heavy gamers in the HD console audience are an average age of 24, or four years younger than the average age for the core audience, and the average playtime among this group is 19 hours per week.

Are women being underreported?

I’ve heard the idea that surveys like Nielsen’s may underreport women. The idea goes that women are socialized to think of video games as an activity for men, and therefore even if women play video games, including core games, they might not identify themselves as “gamers.”

The idea is anecdotal, for me, and not based on any hard data. But this sounds like a reasonable concern, so I asked Pike whether she could address it. “In our survey, we identify gamers via consumers who say they spend time doing the following: ‘Playing video games, on a console, handheld, computer, cellphone, or online’ – the intent here is to present them with a variety of platforms to help clarify we aren’t only referring to the core gaming audience,” Pike said.

“We’ve actually experimented with multiple ways of asking questions like this to qualify gamers, and you’re right that sometimes a more generic approach can skew results. However, we feel comfortable that the verbiage we use is more comprehensive, and data comparisons across question types has proven this to be true.”

Nielsen believes there is no reason to think that their statistics under report women. Their demographics on the core audience would therefore seem not only to validate concerns about the dominance of the male perspective in core gaming, but in my mind they also question whether or not those concerns will ever be addressed.

Short of a study on how many women are staying out of core gaming specifically on account of the lack of female characters or sexist depictions of women, there is no economic reason I can think of why developers or publishers of core games ought to care about selling to an audience which might exist more than selling to the audience they know exists.

The core industry has been slow to adapt to the idea of a gender diverse audience. Activision recently announced that Call of Duty: Ghosts will have female playable characters in its multiplayer component, but Call of Duty has been one of if not the most popular multiplayer first person shooter franchises for six years. FIFA soccer, a video game franchise for the most popular sport worldwide, a sport with countless numbers of female fans, denies women the opportunity to play as a female in Club mode because of the extra work that would entail.

BioWare is well regarded as a gender-friendly company both for offering strong, confident women like Commander Shepard in the Mass Effect series as playable characters and for depicting romantic relationships beyond the heterosexual norm as in Dragon Age: Origins. BioWare’s reputation for their progressive stances on these issues would not loom so large if these sorts of depictions were commonplace in video games.

I would like to see much more gender diversity in perspectives and characters in core games, but I think of this as a cultural concern and not an economic one. As a man it’s easy for me to rest with that opinion, but I also don’t know of many companies who do the right thing just to do the right thing.

The Xbox One and PlayStation 4 may be the last core consoles produced before the market evolves beyond the need for dedicated video game hardware. While shooters and action and sports games will undoubtedly continue to be produced for whatever hardware fills the core console niche in a decade or more, smartphones and tablets may be the video game devices of the future, and their audiences are 54 percent male/46 percent female and 56 percent male/44 percent female respectively, according to Nielsen.

The long-term solution to the problem of gender inequality in video games may not involve the cooperation of the core console industry but merely its death. If the core console industry dissolves, it may take with it the last holdout in what has historically been a man’s world of video games, and the popular conception of gaming may finally match the overall diversity which currently exists, but which the public at large rarely sees.