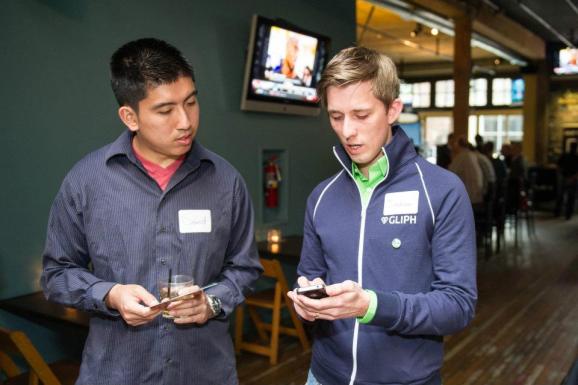 Bitcoin has been called “one of the most brilliant innovations” in the protocol space,  and Gliph is one of the startups trying to bring this cryptocurrency to the mainstream.

Gliph bills itself as the only native application in the Apple App Store that supports sending and receiving Bitcoin. Today, the company announced it has closed $200,000 towards its seed funding and presented at the demo day of Boost VC, a startup accelerator with a fund dedicated explicitly to Bitcoin.

Founder Rob Banagale told VentureBeat that most Bitcoin transfers are done using “Bitcoin wallet addresses,” which are “long, ugly strings of letters and numbers” that are difficult to identify — 1JwSSubhmg6iPtRjtyqhUYYH7bZg3Lfy1T, for example. It is possible to use e-mail addresses to make payments,  but only if the sender and the receiver use the same wallet provider.

Gliph’s approach is to integrate with wallet providers and move Bitcoin on behalf of its users. Banagale claims it is the “world’s easiest way to send Bitcoin.”

“Gliph helped define the API calls necessary to allow Gliph to move Bitcoin, ” he said in an e-mail. “This is far and away the most extensive Bitcoin wallet integration performed by any company in the market today.”

Bitcoin is a decentralized, peer-to-peer virtual currency that was introduced in 2008. This technology has attracted a lot of attention this year, some good and some bad. Its value soared to $260 in April and then plummeted by more than $100 in a matter of hours on the same day.

Although more stable now around $135, the currency is volatile. It is subject to outages and hacker attacks, and it has been associated with seedy behaviors such as black market purchasing, Ponzi schemes, and tax evasion.

Bitcoin’s potential, however, is huge, and people across the tech industry are excited about the possibilities.

“This is one of most brilliant innovations in the protocol and financial space we have ever seen,” said AngelList founder Naval Ravikant during a panel on Bitcoin at TechCrunch Disrupt. “This will be an incredible adventure for mankind if it works. What wall street does and be done in code by Bitcoin.”

Companies like Gliph and Coinbase aim to legitimize the Bitcoin ecosystem and make it more accessible to consumers, and investors like Boost and the Winklevoss twins, and even Y Combinator, are pumping money into it.

Gliph is available on iOS and Android and accessible on the Web.

Boost VC was founded by Adam Draper, son of venture capitalist Tim Draper, who led this round for Gliph. Gliph’s headquarters is in Portland, Oregon.