Last year when the iPhone 5 launched, it sold five million units in its first weekend of sales. This weekend, Apple could sell as much as 30 percent more iPhone 5S and 5C models, according to one analyst.

“In aggregate, we believe Apple will sell a total of six million to 6.5 million of the two new iPhones this weekend,” Cantor Fitzgerald analyst Brian White said today in a research note.

That’s due to the fact that Apple’s selling two models as opposed to one, of course, but also because, unlike other years, Apple has stopped selling the previous year’s model, the iPhone 5. Previously, Apple had always kept the immediately prior model on the shelf, diverting some sales away from the newest version. 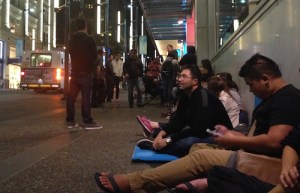 Above: Lining up last night for the iPhone in Vancouver, Canada.

The 5C could be the big seller — not just because it’s cheaper but also because it was made available for preorders on Sept. 13, so it has had a bit more sales runway. Oddly, the 5S was not available for preorders, and White notes that over two million iPhone 5 units were preordered after Apple’s last big phone launch. Of course, that the iPhone 5C is cheaper — and is available in multiple colors — likely won’t hurt its sales either.

However, that up to 6.5 million projection might even be on the low side.

Delivery times for some of the key models, such as the 16GB charcoal model, are already up to seven to 10 days as of 9 a.m. today (Pacifc), after being one to three days earlier today. And a former coworker told me that the lineups at the local Apple stores in Vancouver were “massive,” with people lining up since last night.

While the 5S might be in shorter supply, there should be plenty of 5C’s to go around.

“The iPhone 5C was available for preorders starting on Sept. 13, and our research suggests the tech supply chain made ample supply available for the launch,” White said.

That’s all good news for Apple.

After months and even years of declining global market share versus Android, the combined iPhone 5S and 5C launch is Apple’s shot at reclaiming some of the mobile market leadership position it has surrendered to Google.

Heck, the people in the coffee shop where I’m writing this post are also talking about the new iPhone launch and whether the 5S is worth upgrading to. Most, however, are not as crazy as these two twentysomethings who camped out at New York’s iconic Apple store for two weeks — and weren’t even first in line.