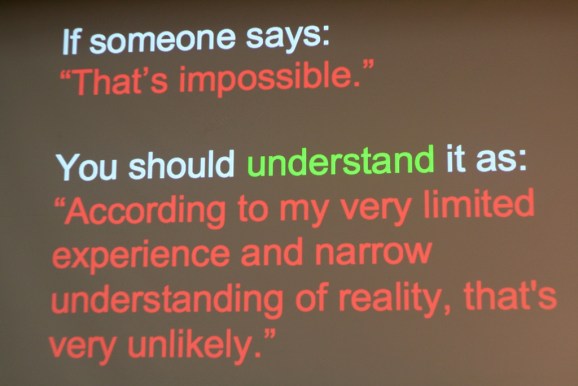 Travis Deyle is a cofounder of fashion auction site Lollipuff.com

Y Combinator (aka, YC) is the world’s preeminent startup accelerator. Led by Paul Graham, YC is well known in entrepreneurship circles for its startup community and household-name alumni such as Reddit, DropBox, AirBnB, Heroku, and Disqus. Twice a year, entrepreneurs vie for a spot in the current Y Combinator batch, hoping to join the ranks of the 564 other YC-backed companies.

And with good reason: The average valuation of a YC company is $22.4 Million.

Well, it’s that time of year again: YC is now accepting applications for its Winter 2014 batch. Applications are due October 21st.

But an exceedingly small percent of applicants will be selected to join the prestigious corps of YC alums, receive the ~$100k in seed funding (from YC and YCVC), and have a chance to pitch hundreds of investors at the bi-annual “demo day.”

What does it take to get into YCombinator?

Scrappy entrepreneurs are always looking for an edge in the application process. However, there are no shortcuts or hacks. The YC partners are too smart for that. The best advice (to use a Paul Graham-like koan) is “to just be really good.” YC itself provides plenty of more-actionable application advice, including Drew Houston’s DropBox application.

It’s illustrative to look at others, like Alexis Ohanian’s Reddit application and Seeing Interactive’s application. Recently we decided to share Lollipuff’s YC experience from the more-recent Winter 2013 batch, including our complete YC application .

What do these applications have in common, and how were they evaluated? From our perspective, the application questions explored three things:

Some YC applications are impressive along all three axes, but that’s not strictly required. From our YC batch (Winter 2013), there were companies with a single founder, some without an idea at all (let alone a product), and some that were pre-launch (ie. no traction to date). But all the companies were strong in at least one, and equally-important, they communicated the strengths concisely (ie. no marketing speak).

You need to be exceptional in at least one of those three: team, idea, or traction.

Is your team a bunch of ex-Googlers? Did you get into Harvard at 19 and drop out to do startups? Have you founded a company before? Did it exit or blow up (both can be interesting)? Is your idea revolutionary? Does it change the status quo? Does your website already have 10,000 active users? Did you finagle your way on to CNN to get attention for your startup? Do you have millions of monthly page views? A successful Kickstarter campaign?

It’s been said that Harvard has five times the number of qualified applicants as admitted students. So the only way to get an admission officer’s attention is to have done something unique that sets you apart. And while there are dozens of books about how to get into Harvard (that sell really well!), there isn’t really a recipe for uniqueness.

Applying to Y Combinator is similar, except that YC’s acceptance rate is lower than Harvard’s! In short, you need to cast off modesty and tell YC the most impressive things about team, idea, and traction.

We also recommend reading through Paul Graham’s essays to understand how he thinks.

For example, you’re not trying to get YC to buy your company — you’re just trying to prove that you have a chance (however small) of being a big success so that they’ll make a small bet on you. Getting a YC alum to review your application and provide feedback is also extremely helpful. Don’t know a YC alum? I’ll bet someone in your network does (6 degrees of Kevin Bacon and all).

“Should I apply to Y Combinator?”

People ask us this quite a lot. At the time when we applied, we were heads-down creating our product. We knew we had a great team, a great idea, and decent traction (everything done manually and self-restricted to a single, small niche). Filling out a competitive application was a non-negligible time sink, but we all agreed: thinking about and communicating these minutiae would be extremely beneficial.

* Business people might shudder at the lack of a preemptive business plan. Nope. We didn’t set out to create a company at all. Users of the blog (Lollipuff’s precursor) were clamoring for us to implement a more general solution. All of our founders are hackers and were perfectly happy working at “normal” (or not-so-normal) tech jobs. The company chose us.

If you’re an early stage team, it’s worth reading through some of the successful applications and applying to YCombinator. It will force you to think about the “right things” for your company or idea, and the potential upside is well worth it.

If your application is compelling, YC will invite you out for on-site interviews. I could regale about that process too. But let’s not put the cart before the horse. Focus on writing a great application first.