Chip Sineni did the best he could as my tour guide. He left his character for a moment to zoom out of the map, showing me just how much destruction the apocalypse had brought to the city. Unfortunately, that meant he wasn’t paying attention when creatures suddenly appeared and attacked him mercilessly until he died. He started over, but they killed him again just a few minutes later. The monsters weren’t backing down.

The director and cofounder of Phosphor Games Studio was trying to show Nether, a first-person massively multiplayer online (MMO) survival game for PC. It takes place 10 years after a mysterious event called The Cull wiped out most of humanity. The few survivors left have to fight for scraps while being chased by nethers, mutated creatures that use teleportation to find you. One of its inspirations is DayZ, a popular and ruthless zombie mod for PC military shooter Arma II (that’s also coming as its own PC game).

Beyond Nether’s basic survival gameplay, however, the developer hasn’t decided what other features it’ll include. That’s where you come in. It’s hoping to gather feedback from the community to find out what they want to see in this kind of MMO. 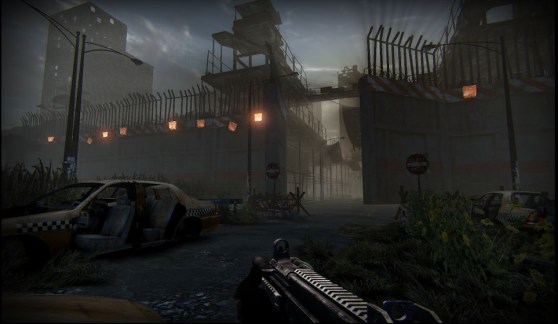 Above: Safe zones are the only places where you can store your items.

“We really feel with such a multiplayer-centric game, the community is the best source for what kinds of features are important for them,” Sineni said to GamesBeat. “Historically, developers can spend significant resources building features that players aren’t even asking for. Having the audience keep playing the game is everything — as developers, we need to focus on delivering the features that will keep them playing.”

To help gather those responses, Phosphor Games will have an “early release” (and work-in-progress) version of Nether available for purchase this fall, with a proper launch scheduled for 2014. Here’s what you can expect so far, along with some ideas that Sineni said may or may not make it into the game, depending on what the community wants.

Carving out a place of your own

What I saw
Nether takes place in a large, decrepit city that shares some similarities to Chicago, home of Phosphor Games. The wide, empty streets, thick fog, and tall buildings — as high as 20 stories — makes it easy to hide from other players (up to 64 per server). As in DayZ, you have to decide whether you should trust complete strangers and team up with them  or just shoot them first and take their supplies for yourself. Headlines from old newspapers give some hints to what happened 10 years ago, but Phosphor Games mostly want to focus on players creating their own stories.

Since you can enter most buildings on the map, you could try to fortify a room or floor with a well-coordinated team, but that still wouldn’t stop the nethers from teleporting inside. Your best bet for protection is hiding out in safe zones, fortress-like areas where you can store your items. Sometimes, you’ll have to help defend these zones from waves of creatures when the Anti-Nether towers break [seen in the video below], and whoever repairs them first gets a money and experience bonus.

You can also buy or trade supplies with players while you’re inside, but nothing is stopping them from ripping you off once they take their payment.

What they might add or change
The developer is thinking about fleshing out the fiction more with audio or journal entries and nonplayable characters to talk to. Player-owned spaces are also a possibility, Sineni said, just so you have another area to store your equipment if you’re too far from a safe zone.

Fighting back against the nethers

What I saw
The nethers come in different shapes and sizes: the Heavy (a “thug-like” nether), Hunter (tracks you), Shrieker (alerts other nethers if they see you), a “Sub boss” (you need multiple people to take it down), and the Broken (brain-dead humans who resisted some of the mutation and won’t attack unless you provoke them). Hunters, the only type in the demo, spawned alarmingly fast and attacked in swarms. Sineni fended off a few of them with a kitchen knife, but they quickly overwhelmed him before he could heal himself with a bandage.

When you die, you lose almost everything in your backpack, keeping only your money and experience points. Guns are available, but they’re not as common as melee weapons.

What they might add or change
The team is still deciding how rare guns and bullets will be and whether you can craft items. How frequent the nethers appear also needs tweaking, a number that could increase when night falls (time of day made no difference in this version). 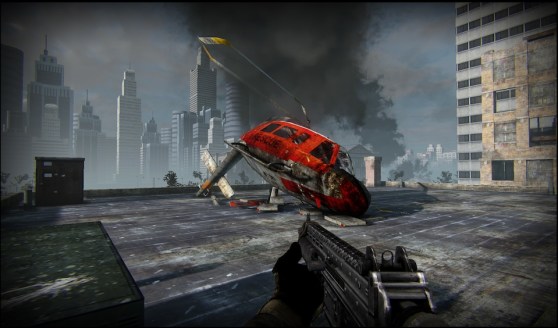 Above: You can climb up most buildings.

Nether is a change of pace for the developer, who’s best known for the mobile games Horn and The Dark Meadow. Phosphor Games did have a different PC title in the works, the superhero action game Project Awakened, but development halted after two crowdfunding campaigns failed to raise enough money. Phosphor’s “core” team is working on Nether.

“PC players are very open-minded with trying a variety of game genres, and you can sell games cheaper on PC, so more people can try your game out without spending $60,” Sineni said when describing their new emphasis on PC games. “We’d always talk about the kind of game we could make on PC — a lot of our team plays MMOs and multiplayer shooters, and [that] really made us question ‘well why aren’t we just making a PC game?’ Indie devs can’t do a persistent game like Nether on other platforms. PC is really well suited for it.”