Her review: Easy to use, but do matches follow through?
Her rating: 4/5

Getting started: This app has a few glitches to work out, but overall I’d say it’s pretty brilliant. I had to force myself to open the other apps, but when my Coffee Meets Bagel match arrived in my inbox at noon, my curiosity was piqued, and I was eager to open it. After viewing your date’s profile, you click “like” or “pass.” If you both like each other, you get a text message with an (extremely lame) ice breaker. The message comes from a temporary phone number that is yours to use for a week. 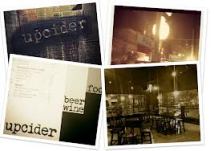 Above: The venue: Upcider in the San Francisco’s Tenderloin District near Union Square.

The date: I got a match my first day of using the app and immediately asked Jason out. Although I had to make the first move, he suggested a time and location — Upcider on Polk St. We had a very pleasant time, and he seemed like a reasonable match for me on paper. He owned his own web development company, and he’s into running and a world traveler. He was pretty flustered when I came clean about the article, but we managed to bounce back from the awkwardness and enjoyed quality conversation. No real sparks, though.

I also asked him about his experience with the app, and he said he had matches before but never followed through on them. As I continued to use the app, I found that this was a trend, which is kind of bizarre. It means that two people who went through the effort to open an e-mail, click on a profile, evaluate and “like” a person mere minutes before, and don’t bother to follow up when the time comes to send a text. I can see this being a problem for girls who prefer a guy to make the first move.

Would I use it again? I’m still a fan of CMB for its ease and simplicity. And unlike other low-maintenence apps like Tinder and Let’s Date, it does a great job of filtering for people who are actually suited to you, at least on paper.

His rating: 5/5
His review: An easy way to set up quality dates 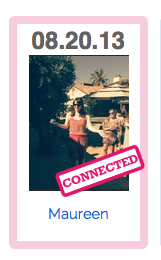 Getting started: After connecting with Facebook, Coffee Meets Bagel (CMB) gives you ONE potential match per day, called a “bagel” — delivered via e-mail — which you can “like” or “pass.” The app shows you up to four pictures of the bagel, plus a basic profile as well as a count of how many Facebook friends you have in common.

They’ve invented a virtual currency — “beans” — which you can use to buy features. All of these features seem stupid, except for one-time unlocking the names of your mutual Facebook friends. You might want to use this information before or after a date, if you’re the light-stalking type.

What impressed me most was the quality of their bagels. Having used other services, I was expecting a cross-section of the population. But instead, I almost exclusively received highly educated, professional, attractive women. I’m not sure how their algorithm works, but it’s fantastic. I liked almost all of my bagels. When they Like you back, CMB sets up a disposable phone line for you and your match (similar to Burner), which protects your privacy while making it very easy to coordinate plans.

If you’re seeing a pattern, reader, so am I — CMB is an easy way to set up quality dates.

>> Turn the page for the next review: Grouper >>