Her rating: 5/5
Her review: Better than any dating app 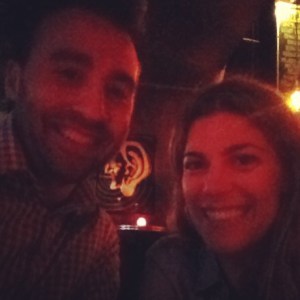 Above: Scott didn’t have a beard as promised.

We decided that the best control group for our experiment would be to ask someone out in real life. The good ol’ setup by a friend is the original dating app, so I turned to my partner in crime, Robert. He assured me his friend Scott was tall, very smart but socially adept, athletic, and to top it all off, has a nice beard (in theory, my type). Imbued with that minimal information, I ended up on a date with Scott about an hour after he first texted me.

Scott didn’t actually have a beard when he showed up, but he was polite and easy to talk to. I agreed to a second date in exchange for permission to write about him for this article, but it hasn’t happened yet.

Robert also sent me up with another friend, Chris, who I definitely clicked with when we met at happy hour.  We ended up at a concert together accidentally the next night, but my burnout from this experiment left me more committed to my new, viral blog idea: “40 Days of Not Dating.”

Despite my newfound antisocial tendencies, I have to say that meeting in real life is better than any dating app — more specifically, having a lot of friends who can expand your social circle. After this week, I feel more strongly than ever that dating is an unnatural activity.  If there was an app that let you get to know lots of people in a nonromantic, casual way, I might consider using that. That is, if I ever decide to leave my room again. …

His rating: 4/5 Stars
His review: I got burned, but I’d still go the old-fashioned route 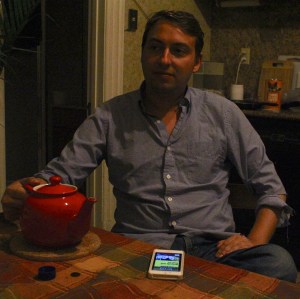 Above: Fatigued by dating apps, Robert ditched his phone in favor of a good-old fashioned setup.

As a baseline, and point of comparison, I tried going the “normal route” during this project – meeting people offline, but without making any special effort by which I’d bias my research.

I met a nice, interesting woman at a party, who also worked in technology, and got her phone number. But I didn’t set up a date — I was busy enough with five nights of dates from dating apps for this story. I also met a woman at Lone Palm (one of my favorite local bars), who I would be interested in calling. And I had dinner with one of Rachel’s colleagues, Lauren, who declined my offer to go out again. (Burn!)

After all of this, I still prefer meeting people the old-fashioned way — in real life.

Editors’ note: Rachel and Robert are now fast friends. Neither found love through this experience.