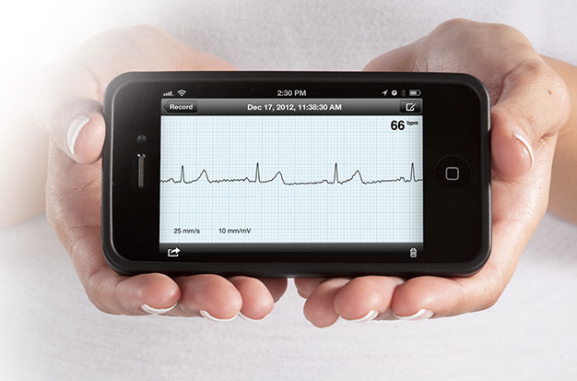 Alivecor is one of thousands of new mobile health apps. It lets you measure your heart rate with an iPhone

The United States Food and Drug Administration has finally released guidelines on how it plans to regulate thousands of new health-related smartphone applications.

After months of delaying its decision, the agency has determined that the vast majority of these health-related apps pose a negligible threat to consumers. Most of these “mobile medical” apps do not need federal regulation, the FDA found, so developers and investors can breathe a bit easier.

FDA officials released a statement this morning that it has already approved 75 mobile medical applications, including 25 in the last year. Agency officials estimate that 500 million smartphone users worldwide will use some type of health app by 2015.

The FDA will focus its attention on the apps that turn your mobile phone into a medical device, like a medical attachment that plugs into an iPhone, not all of the 17,000-plus mobile health apps that are currently on the market (like urine analysis applications or calorie counters). These applications are a small minority, but they have been deemed by the agency as the most likely to put patient safety at risk. Some nondevice apps will require approval as well. In addition, “mobile app distributors” like the Apple App Store or Google Play, will not come under the FDA’s jurisdiction.

“The guidance provides clarity about what will and will not be the focus of FDA’s regulatory oversight,” said Corey Ackerman, president of health app marketplace Happtique, on hearing the news.  “It should allow developers and other stakeholders to have more regulatory certainty with respect to mobile app innovation in the health and medical industry.”

Regulators will keep a particularly close eye on the applications that seek to replace a doctor’s visit or perform clinical tests. For instance, several new mobile medical devices are currently under development for asthmatic patients — the technology enables them to measure lung function by blowing on an iPhone. This device poses an alternative to machines in a hospital or doctor’s office and would therefore require regulation.

The explosion of applications to track and monitor your health — even diagnose diseases — has been a thorn in the side of the FDA for some time.

The agency released a draft guidance on mobile medical apps in June 2011, but it delayed its final guidance on several occasions.

For over a year, the agency has threatened to regulate new applications, even targeting a few. These actions have provoked waves of confusion and concern for health-focused investors and entrepreneurs, who fear the specter of overregulation from Washington, D.C.

As we reported in April, medical entrepreneurs said that potential investors were “scared off” by the lack of clear guidelines. The FDA responded to my request for comment by stressing that agency representatives were “aware” of the concerns and would work closely with entrepreneurs to balance “patient safety and innovation.”

Meanwhile, many angel investors and venture capitalists have demurred on a decision to invest in a mobile medical app until the FDA releases its final set of guidelines.

Medical device investor Michael Carusi has repeatedly spoken out in the press, urging the FDA to take action. “We have been pushing the FDA on how difficult it is to get products approved,” said the general partner at ATV Capital.

For the digital health ecosystem, Monday’s final guidance will provide some clarity. It could even inspire a wave of digital health investment, which is in line with the mHealth Regulatory Coalition’s (MRC) prediction this June. A spokesperson from the MRC fired off a letter to Health and Human Services Secretary Kathleen Sebelius, calling for a final guidance to “unlock needed investment.”

Ackerman agrees that the final guidance will prompt investors top open their check books. “Investors crave a level of certainty when it comes to regulations, and this guidance should give them comfort,” he said.

Health entrepreneurs have repeatedly been called in to testify in congress. Ben Chodor, Happtique’s then CEO, called me after a visit to Capitol Hill earlier in the summer.

Chodor said he informed the FDA about the pressing need for a final guidance. “Developers are mystified by the rules in this highly regulated industry,” he said.

In addition, entrepreneurs and policy experts, including Practice Fusion‘s Lauren Fifield and noted investor Esther Dyson, recently formed a health IT “workgroup.” Representatives from the digital health sector in hubs like Silicon Valley and New York have been asked to dial in to a weekly conference call with spokespeople from various health-agency bodies in D.C.

The goal, as always, is to inspire the formation of new technologies (especially those that focus on reducing health care costs) and enforce the requisite consumer protections.

This is just one of the recent efforts to strike an active dialogue between entrepreneurs, investors, and various regulatory agencies.

Going forward, the FDA will need to provide more examples of how it intends to regulate mobile medical apps. Entrepreneurs are still in the dark about how long the process will take, and how much it will cost.

In May, the agency launched its first official investigation into a urine analysis app called UChek. The app claims to offer a “medical lab in your iPhone,” which is the type of messaging that would trigger a response from the FDA.

The discussions around uChek provided a window of understanding into the FDA’s thinking. It became evident that the agency does not intend to expand its jurisdiction and regulate more (it’s unlikely that a government agency has the funds to do so), but is primarily concerned with a subset of mobile medical apps/ devices.

“Some mobile apps carry minimal risks to consumer or patients, but others can carry significant risks if they do not operate correctly. The FDA’s tailored policy protects patients while encouraging innovation,” said Jeffrey Shuren, M.D., director of the FDA’s Center for Devices and Radiological Health, in a statement today.

In the meantime, we’ve seen Scanadu, the parent company behind Scout, a medical tricorder, launch a crowdfunding campaign to raise awareness and cash. Scanadu intends to sell the device on Indiegogo, while conducing the usability tests required for regulatory approval.

Startups have been been taking more innovative approaches like these to get around the FDA. However, with today’s final guidance, and more clarity from regulators in D.C., the FDA may no longer be perceived as the “big bad wolf” in health care.