Apple’s brand-new 64-bit iPhone 5S is faster than the Phone 5 in unlocking, booting, and running benchmarks … but not much faster in real-world applications, according to a side-by-side comparison test.

In other words, 64-bit is more about tomorrow than it is about today.

Running the SunSpider Javascript test, Richardson found that the 5S almost doubled the iPhone 5’s performance, blasting through the benchmark in 426 milliseconds to the 5’s 707 milliseconds. And on GeekBench 3, the iPhone 5S scored a massive 2,561 to the older 5’s 1,304.

Those both sound huge, almost double, and they’re completely in line with AnandTech’s painstaking iPhone 5S benchmarking, which showed Apple’s new 64-bit A7 chip for smartphones has desktop-class performance on par with some of Intel’s and AMD’s lower-end CPUs for laptops and what we used to call netbooks. In other words, jaw-dropping capabilities in your pocket.

But the most important question is real-world performance. 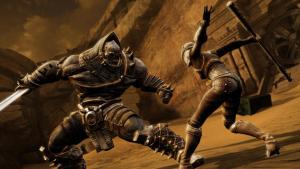 And for most apps, there just isn’t that much difference, Richardson says — and the video shows. Real-world performance, of course, is where users feel the improvement of a new model … or not. I’ve been using an iPhone 5S for the weekend as well, and I haven’t noticed that much of a speed boost, either. The main difference, as you might expect, comes in big graphics-intense games like the one Apple demoed when launching the new iPhones: Epic Games’ Infinity Blade III.

“You can definitely notice in person there’s an incredible amount of detail being added,” Richardson says. “The difference isn’t huge, but it is noticeable.”

I have to put one very important caveat here, and it’s related to the incredible photo and video capabilities that Apple has put into the iPhone 5S. Slo-mo high-def video and sophisticated photo engineering such as auto-stacking and layering and selecting best shots from multiple are all processor-intensive tasks, and the 5S breezes through them with no noticeable delay.

That aside, however, there are two important lessons here.

One is that consumers can feel just fine about picking the slightly cheaper iPhone 5C, which has pretty much the same specs as the older iPhone 5. It’s still a fast, fast phone that offers performance in real life for most apps on par with the latest and greatest in the mobile world.

The second is that 64-bit is cool and cutting-edge, but that its true power is yet to be unlocked with more demanding apps that can soak up all that speed. When chatting about the new phone with me last week, an Apple representative used the word “future-proofing” in reference to the iPhone 5S.

And that’s what you’re really buying when you buy 5S over 5C.

Of course, you won’t be able to do this: