The JOBS Act is a complicated, flawed piece of legislation.

It permits companies like Twitter to file pre-IPO paperwork secretly, giving them a chance to hide their accounting shenanigans from public view until just a few weeks before the actual IPO. It loosens restrictions on investment banks’ analysts promoting the stock of companies who are their customers. (Henry Blodget would have been happy if that rule had been in effect when he was an analyst.) It will permit a much wider range of people to risk their life savings in dodgy startups. And it will let startups grow much larger, and bring on more investors, before being required to go public and expose their books to the light of day.

But on the plus side, it opens the door for much more grassroots fundraising, whether that’s on crowdfunding sites or in local communities — and that will help innovators and entrepreneurs everywhere. Today, a major provision of the JOBS Act went into effect: The end of the ban on general solicitation. One company, TechShop, shows how that could make a major, positive economic difference.

TechShop is a chain of physical work spaces where people pay a monthly fee in exchange for unlimited access to a wide range of hardware tools, ranging from drill presses and lathes to CNC laser cutters and 3D printers. It’s an attractive place for do-it-yourselfers, fledgling hardware startups, artists, and hobbyists to hang out and work on their projects.

“TechShop is like a maker space, an economic development zone, and an artist’s commune all rolled into one,” its chief executive, Mark Hatch, told me.

Notice a pattern? In each of those cities, Hatch had to find a local heavyweight partner to provide the majority of the funding. The restriction on general solicitation meant that he couldn’t easily go out and canvass the local business communities for the $2 million to $3 million needed to open each new location. It was a high-touch, inefficient, and slow process.

Now he can kick the fundraising into high gear. TechShop announced this morning that it would be seeking $60 million in funding to expand into a handful of new cities — an announcement that only became possible thanks to the JOBS Act’s provision on general solicitation.

For more on the JOBS Act’s new provisions, see:

General solicitation is exactly what TechShop is doing today: Putting out a press release and telling the world that it would like to take your money in return for a share of the company. Before today, that was illegal: A private company could only solicit investments privately, in face-to-face, closed-door meetings.

Now, the company can broadcast its intentions on the Internet, via crowdfunding sites, or even TV and radio ads, if it chooses.

“We can go into every community and say, ‘If you guys are interested in funding your local TechShop, we now have a way of making that happen,'” Hatch said.

So how will this make a difference? Take Grand Rapids, Mich., for example. In Grand Rapids, Amway heir, onetime gubernatorial candidate, and arts patron Rick DeVos is building a startup incubator called Start Garden. It’s a $15 million seed fund, and with the surge in demand for local incubators, it comes at a fortuitous time. Plus, there’s manufacturing capacity in the region, what with Steelcase’s global headquarters located in Grand Rapids and the dwindling but still mighty Detroit auto manufacturing industry not too far away.

What Grand Rapids doesn’t have is an easy way for entrepreneurs to get their hands dirty building hardware prototypes. With a TechShop, it would.

The benefit would be threefold. First, schoolchildren benefit from having a workshop nearby where they can visit and learn about making things that they might not be able to pull off in the school’s wood shop (and that’s assuming that their school still has a wood shop). It also helps university-age engineering students realize that they can still be engineers, even if they aren’t necessarily whizzes at high-level mathematics, assuming they’re willing to put some time in at the shop.

“It’s OK if you get a C in vectors,” Hatch said. “You can still be an engineer. But if you haven’t built a trebuchet… .”

Second, recent engineering graduates benefit because they have a place to explore their more ambitious projects, the kinds of things they’ve dreamed of doing but which few entry-level engineering jobs afford. Instead of persuading someone in your company’s machine shop to leave the lights on so you can work late on your own project, you can head over to the TechShop and hang out with friends. 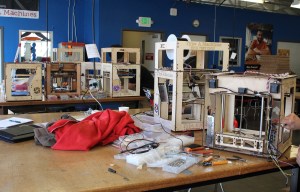 Above: Type A Machines assembles its 3D printers at the San Francisco TechShop.

Third, TechShops are plugged into the incubator culture — and the arts culture — of the towns they’re located in, creating a nexus of creativity and economic activity. Many startups have emerged out of the three California TechShop locations already, such as BioLite, OpenROV, Type A Machines, and even Square. Larger impacts are hard to measure, but one reason the VA invested in the Pittsburgh location is because of the opportunity to help train veterans with new skills. Separately, the San Francisco TechShop helped Mark Roth get out of homelessness and start his own company.

TechShop currently has 5,500 paying members and will bring in $10 million in revenue this year, Hatch told me, up from $6.5 million last year. With the general fundraising, he’s optimistic that he will be able to open one new location in Q1 of 2014, two in Q2, another two or three in Q3, and three or four in Q4.

“We’re just going to go back to the crowd,” Hatch said. “It’s going to make our lives so much easier.”

But for Hatch, it’s bigger than his company: This is a fundamental shift in the fundraising process.

“I think we’re just the tip of the iceberg,” he told me. “With the JOBS Act , a lot of people are going to get excited about this as a way to supplement angel and venture funding, or just replace angel and VC. It’s a new route to IPO.”

I’m not as unreservedly optimistic as Hatch is. I applaud the increased liquidity for startups, and I welcome the increased flexibility for founders who want to use creative ways of getting their companies started. Venture capital encourages founders to think in very fixed ways about how to grow, and it enforces a definition of success that’s not necessarily a good fit for every company: Go huge or go home. So the new general solicitation and crowdfunding rules open up a lot of possibilities, and I think that dovetails nicely with the surge in entrepreneurial activity and DIY spirit that is sweeping the country.

But I worry about the lack of transparency. If these new avenues for fundraising aren’t accompanied by an equally vigorous demand for disclosure and accountability, all this surging optimism is going to end up in a twisted wreck of securities fraud and broken dreams.

“It’s literally been 80 years since you’ve been able to let people know that you’re raising money in a general way in the U.S.,” Hatch told me. “It’s a huge deal.”

But 80 years ago we were in the depths of a depression wrought by the unscrupulous and unfettered solicitation of dubious investments. Let’s hope that this isn’t the beginning of the same old story.