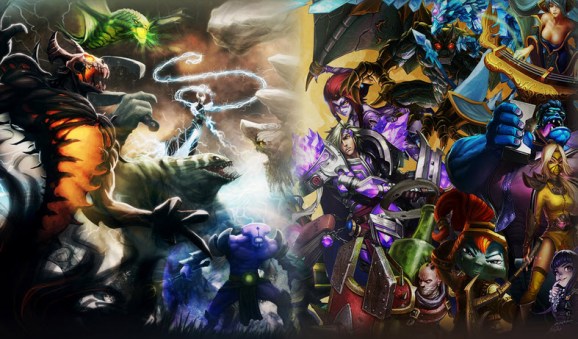 DOTA 2 vs League of Legends

Call of Duty: Black Ops II was the most played game in August according to gaming social network Raptr. But the big news in Raptr’s data measurements is that Valve’s Dota 2 overtook Riot Games’ League of Legends to capture the No. 2 spot.

That’s significant since Riot Games has ruled the multiplayer online battle arena (MOBA) category since it launched League of Legends in 2009. Most MOBA titles consist of five players challenging another team of five in a fast-and-furious real-time battle with fantasy characters. The genre became wildly popular because of its spectator modes, tournament livestreams, and world championships featuring eSports personalities.

But the data isn’t definitive when it comes to measuring whether Valve will permanently overtake Riot.

Raptr, a network with 18 million members, collects data about which games its members play across the PC and Xbox 360 game platforms. Nintendo and Sony don’t share their gameplay data publicly, and Raptr’s data skews toward North American players. Still, Raptr captures data from a considerable chunk of the market.

Lisa Cosmas Hanson, managing director of China-focused market research firm Niko Partners, said that in China, DOTA 2 did not beat out League of Legends in the Chinese online games market. That’s because DOTA 2’s open beta test launched on Aug. 24 and it required a code to play. By Sept. 25, the game will be playable in China without the code. Cosmas Hanson said that League of Legends outperformed DOTA 2 in internet cafes that Niko Partners tracks.

Above: Ratpr’s most played games from August.

Valve’s Dota 2 and League of Legends are both free-to-play online releases based on the original Defense of the Ancients mod for Warcraft III: Reign of Chaos. Valve formally released its game in July after a long period of beta testing. Among Ratpr members, Dota 2 surpassed League of Legends in both number of players and overall play time.

But Valve has nipped at League of Legends’ heels for months. Dota 2 first passed it in total players on March 3, when League of Legends servers went down. Riot also released some patches that led to some downtime for the community. But total League of Legends play-time hours dropped 13 percent in the last 30 days. New members rose 27 percent in that time, but overall unique active members fell 6 percent. That means older players might be drifting away, and the new players coming in aren’t as engaged, Raptr said.

By contrast, Dota 2 saw an 11 percent increase in unique active members while new sign-ups were down 3 percent.

Another interesting fact from the August data: Trion’s Rift, which recently moved to a free-to-play model, was the fourth-most-played game of August, one slot ahead of No. 5 World of Warcraft.