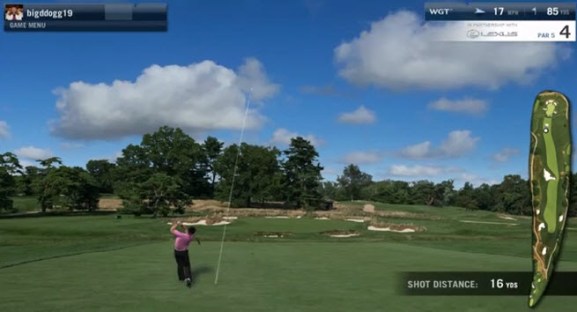 WGT first launched its Virtual U.S. Open online course for World Golf Tour in 2009, and it has now added a variety of courses and tons of new virtual goods items, such as special golf clubs, said Yuchiang Cheng, the chief executive of the San Francisco-based WGT, in an interview with GamesBeat.

WGT partnered with the U.S. Golf Association (USGA) to make its game the official online golf game for the association. Each year, both parties work together to create digitized versions of U.S. Open courses in painstaking detail. Players can join together in online groups to participate in tournaments and play virtual rounds on the courses, which are depicted visually using 3D animation and still photos.

Cheng said that over time, the game has taken on more of a community nature than it had at the outset, with tournaments staged among friends as one of the main ways that players stay engaged.

“The growth of the Virtual U.S. Open over the past five years confirms for us that golfers want to have a deeper experience with our national championship,” said Sarah Hirshland, the senior managing director of business affairs for the USGA. “World Golf Tour complements our other digital programming by giving golfers and golf fans a unique way to truly play the course, providing a more meaningful appreciation of the real-world event.”

World Golf Tour has already photographed Pinehurst No. 2, the course that will host the 2014 U.S. Open and U.S. Women’s Open championships. WGT also operates its own Major League Baseball game on Facebook. That game has more than 500,000 players.