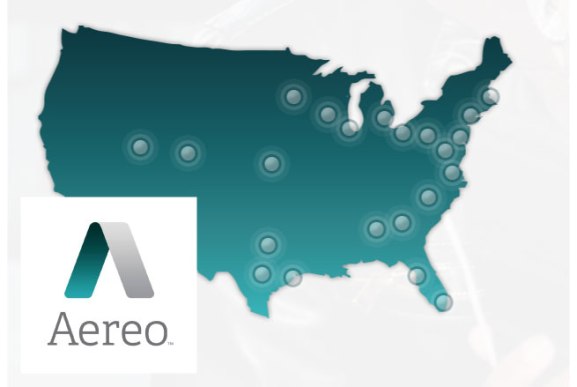 Aereo already announced plans to launch its service in 22 regions last year, and it’s already live in several cities, including Dallas, Houston, Chicago, New York City, Atlanta, and Boston as well as the entire state of Utah. As of today, the company said it plans to also launch in San Antonio; Cincinnati and Columbus, Ohio; and Indianapolis. Aereo will be available to an additional 8 million consumers once the service launches in these four cities.

It’s likely that Aereo is seeking to take advantage of the recent squabbles between major broadcasters like CBS and cable providers that has resulted in millions of people losing access to the CBS broadcast channel, which is actually freely available to anyone with an HD antenna and compatible television (provided they live in a location where they can pick up the signal).

With Aereo, you can watch and record free over-the-air local television content from major broadcasters like ABC, NBC, Fox, CBS, CW, and other local stations via desktop computers, set-top boxes, and mobile devices. It uses a tiny antenna for each subscriber — thus making the service legal in the eyes of the law, thus far. You have the option of paying $8 or $12 per month, depending on how many hours of programming you want to record.

The announcement of additional launch cities comes despite Aereo’s long running legal troubles with major broadcast stations that claim the service is violating copyright laws. While federal judges have mostly sided with Aereo (and the handful of companies like it), major broadcasters did get their first big win earlier this month when a federal court in Washington,  D.C., ruled that Aereo rival FilmOn was indeed guilty of infringing on copyrights.